IMPACT
Currently there are at least 25 bloodroot growers in western North Carolina. These are new plantings and will not be ready for harvest for several more years. There is a projected need by one company for at least 300,000 pounds of dried root per year. It will take hundreds of acres to satisfy that kind of demand. Presently, there are probably less than 70 acres in production in all of North America. Preliminary enterprise budgets indicate that at current prices a grower could expect to net $1,210 per acre after three years. Prices for cultivated bloodroot should rise, however, as wild-harvested material becomes harder to obtain.

INTRODUCTION: Bloodroot (Sanguinaria canadensis) is a native medicinal plant that grows in eastern hardwood forests. It is wild harvested for use in production of several new products. To help conserve native populations and provide a new economic opportunity for forest land owners, research on a commercial cultivation system is being developed. Studies are being conducted at several wooded locations in western North Carolina and under a polypropylene shade structure. Cooperators on these projects include graduate student, Maria Onofrietti, researcher, David Danehower, and technician Agatha Kaplan from N.C. State University and Nick Oberlies from Research Triangle Institute.

Propagation:
This study was established in the fall of 2001 to determine what part of the rhizome can be used for propagation and how long it must be grown to reach an economically feasible size for harvest. The experiment is duplicated in the woods and under a polypropylene shade cloth structure. Propagule treatments were either small whole rhizomes, rhizome pieces with buds, or rhizome pieces without any obvious buds. The plots will be harvested after 2, 4, and 6 years of growth.

Companion Planting:
In this study, established in the fall of 2002, we are examining the influence of companion plants on growth and yield of bloodroot. Bloodroot is being grown in forest beds either alone, with mayapple, or with goldenseal. This study will be harvested after 1, 3, and 5 years of growth.

Tillage Systems:
In this study, established in the fall of 2002, the response of bloodroot growth and yield to various tillage systems is being examined. Bloodroot was planted in two locations in the woods in raised beds, strip-tilled plots, or no-till plots. These plots will be dug after 1, 3, and 5 years of growth.

Results:
Propagation:
The first harvest, after two years of growth, took place in fall of 2003. Rhizome/root growth was much greater under artificial shade than in a natural wooded setting; 4 to 30 times greater, depending on the treatment. In both fields, the absence of a bud on the propagule slowed rhizome/root growth considerably. The rhizomes were not ready for commercial harvest after two years.

In 2004, there was no root harvest so all data were collected on growth of above ground plant parts. One hundred percent emergence occurred only in the plots where bloodroot was grown with black cohosh, goldenseal, or mayapple. Five of the eight bloodroot alone plots had no plant emergence at all.

Tillage Systems:
The first harvest was in 2003. After one year of growth there were no differences observed in growth or root yield.

Conclusions:
These studies will not be completed for several more years. However, at this time we are suggesting that growers consider growing bloodroot with a companion plant, such as black cohosh; consider growing in raised beds or a strip-till system; and consider growing under artificial shade. 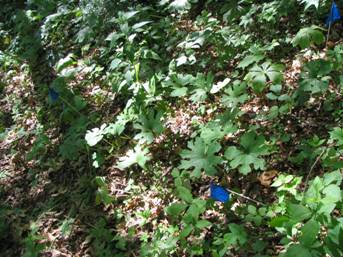 Close-up of a bloodroot test plot in Waynesville. 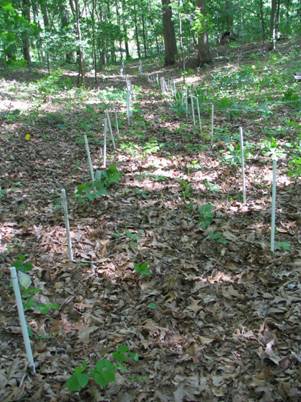