The overall goal of the project was to begin preliminary investigations of processing methods for effective capsaicin recovery in effort to redefine habañero peppers as a value added crop for North Carolina farmers. In addition, findings from this research demonstrates the potential of habañero peppers to positively impact the socio-economic development of the state and to provide an alternative valuable crop for North Carolina farmers.

The popularity of chili peppers has been rising over the years, with a large number of growers emerging all over the United States (Coon, 2003). Chilies are grown worldwide, with Asia producing the most per year, followed by Mexico and the U.S. In 2002, 131,950 metric tons of chilies were harvested in the U.S., and New Mexico had the highest domestic production of approximately 91,000 metric tons (NASS, 2003). In comparison to other hot pepper producing states, the production numbers in North Carolina are small and have dwindled with only 650 acres planted in 2001. However, as specialty crops hot peppers have the potential to provide high value products.

Chili peppers, like the habanero (Capsicum Chinese), are a rich source of valuable phytochemicals such as capsaicin. Capsaicin (trans-8-methyl-N-vanillyl-6-nonenamide), an alkaloid or capsaicinoid, is the principal pungent and irritating constituent of hot peppers that are widely used as food additives and possess antimicrobial properties (Jones et al., 1997; Dorantes et al., 2000; Kurita et al., 2002). Capsaicin has been extensively studied via experimental and clinical investigations, due to its prominent pharmaceutical and antioxidant properties (Long and Medeiros, 2001; Rosa et al., 2002). Moreover, capsaicin has been widely used in anti-inflammatory creams and ointments, and as a counter-irritant in surgical dressings and medicines (Kanwar, 2002). It is being formulated into a wide range of topical and nutritional supplements for pain management and arthritic conditions.

Majority of the capsaicin used in the U.S. is imported from other countries. Pure capsaicin rates approximately 16,000,000 Scoville units on the heat index and can sell for over $5000 per gram (Batchelor, 2000). Solid-liquid extraction using solvents like hexane, chloroform, and ethanol is the most commonly employed method for capsaicin recovery (Tapia et al., 1993; Catchpole et al., 2003). However, solvent extraction is energy intensive, leads to problems of toxic waste disposal, and gives a product that requires further purification. Thus, new extraction technologies need to be established for enhancing recovery yields and reducing cost and environmental impact (Yao et al., 1994). Supercritical fluid extraction (SCFE) methods have the potential to address these needed improvements and increase selectivity and purity. This study is being proposed to obtain preliminary data for the investigation of capsaicin extraction from Capsicum Chinese using SCFE. The objectives of the work included: 1) Examining the processing parameters for solvent extraction of capsaicinoids from whole habañero peppers (Capsicum Chinese) and their various parts and 2) Quantifying capsaicin and dihydrocapsaicin levels in whole habanero peppers and their parts using high pressure liquid chromatography (HPLC).

The effects of solvent type, pepper parts, tissue preparation, and time on capsaicin and dihydrocapsaicin recovery were evaluated. Habañero pepper samples were dissected and separated into seeds and shells. Moisture for whole peppers, shells and seeds was analyzed using an oven drying method (65°C, 24 hours). The whole and dissected peppers were prepared as fresh, freeze dried, and oven dried for solvent extraction using three solvents (ethanol, acetone and acetonitrile) and conducted in triplicate. Peppers used in the study were obtained from Bailey Farms, Inc. (Oxford, NC) and Cunningham Research Station (Kinston, NC).

Fresh, oven dried and freeze dried preparations (0.5 g dry weight) were extracted using a biomass: solvent loading of 15% (w/v) based on the initial moisture content of the pepper samples/parts. Sample and solvent mixtures were homogenized in 50 ml conical glass tubes and placed in a shaking water bath (50°C). Samples were taken every 20 minutes for a period of one hour. Preliminary studies indicated that capsaicin and dihydrocapsaicin yields were not significantly different at times beyond one hour through 24 hours. Samples were processed by vacuum filtration (Whatman GF/A glass fiber filters, 1.6mm) and stored at -20°C (2 ml aliquots) until HPLC analysis.

Solvent extractions for the various pepper parts were carried out using fruits from two farms. While the peppers from Bailey Farms were studied for capsaicin and dihydrocapsaicin content in the fresh and oven dried state, the peppers from Cunningham were oven and freeze dried prior to extraction. HPLC analysis indicated that the capsaicinoid yield from seeds was significantly higher than that from shells or whole peppers, irrespective of preparation and solvent. This may be attributed to the fact that capsaicin content is typically high in the placental tissue (Suzuki et al., 1980; Dewitt, 1999). Capsaicin levels of 23.05, 21.82, and 14.30 mg/g of dry tissue were obtained from fresh seeds extracted for 60 min with ethanol, acetonitrile, and acetone, respectively. The capsaicin levels ranged from 14.40 – 16.88 mg/ g of dry tissue for oven dried (Bailey Farms) seeds extracted with the three solvents. Table 1 shows the capsaicinoid levels in extracts of freeze dried seeds and shells prepared from Cunningham peppers.

Since dissecting the peppers requires time and manpower, it is proposed that whole peppers be investigated in future studies. Hence, the following presentation of results will focus on extractions from whole peppers.

Bailey Farms
The capsaicin and dihydrocapsaicin levels of fresh whole peppers extracted with ethanol ranged from 7.29 – 9.85 and 2.88 – 4.18 mg product/g of dry tissue, respectively. The results from the extractions are shown in Figures 1 (a) and (b) .These were higher than the 5.26 – 7.74 mg capsaicin/g dry tissue and 1.61 – 2.67 mg dihydrocapsaicin /g dry tissue levels obtained by ethanol extraction of oven dried peppers. The lower levels may be related to the undesirable interactions between the solvent and the water present in the fresh preparations. A similar trend was observed for extractions with acetonitrile. Although, extraction of fresh samples with ethanol for 40 min gave the highest capsaicin levels of 9.85 mg/g of dry tissue, the total amount of capsaicinoids (capsaicin + dihydrocapsaicin) extracted at the end of 60 minutes was highest for oven dried, acetone extracted samples (Fig. 2).

Bailey and Cunningham comparison:
A comparison of the solvent extraction efficiencies from oven dried whole peppers, obtained from the two farms, indicates that the capsaicin levels at 60 min were higher in the peppers from the Cunningham Research Station. The dihydrocapsaicin levels were however higher in peppers from Bailey Farms. The slight variation may be attributed to the differences in cultivar, soil type, climate, time of harvesting, and storage period. The total capsaicinoids extracted from oven dried Cunningham peppers ranged from 8.85 – 14.03 mg/g of dry tissue and those from Bailey Farm peppers varied between 9.41 and 11.61 mg/g of dry tissue.

Overall, higher yields were obtained from oven dried peppers using acetone as the solvent. Figure 5 shows the capsaicinoid levels obtained from seeds, shells and whole samples of oven dried peppers subjected to extraction with acetone. As mentioned previously, the capsaicinoid yield from seeds was greater than the shell and whole pepper preparations. This indicates that the concentration of capsaicin and dihydrocapsaicin is greatest in the placental tissue (seeds). It may be expected that the alkaloid contents of the seed and shell samples add up to that of the whole samples. However, the experiment investigated yields from equal dry masses of whole peppers and its parts (shells and seeds). Thus, the composition of the whole pepper (ratio of seed to shell) was not accounted for in the data presented.

Figure 1: Product recovery (mg/g dry tissue) over extraction time for fresh and oven-dried whole peppers from Bailey Farms a) capsaicin b) dihydrocapsaicin. Ethanol = E, Acetonitrile = AN and Acetone = A.

Figure 2: Capsaicin and dihydrocapsaicin recovery for fresh and oven dried whole peppers from Bailey Farms after one hour of extraction using ethanol, acetonitrile and acetone.

Figure 3: Product recovery (mg/g dry tissue) over extraction time for freeze dried and oven-dried whole peppers from Cunningham Research Station in Kinston a) capsaicin b) dihydrocapsaicin. Ethanol = E, Acetonitrile = AN and Acetone = A..

Figure 4: Capsaicin and dihydrocapsaicin recovery for fresh and oven dried whole peppers from Cunningham Research Station in Kinston after one hour of extraction using ethanol, acetonitrile and acetone. 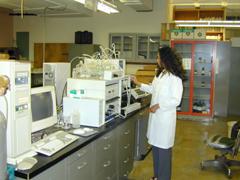 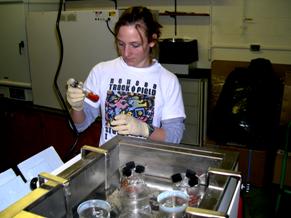 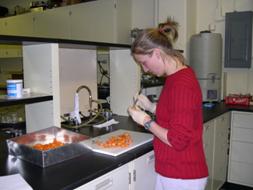 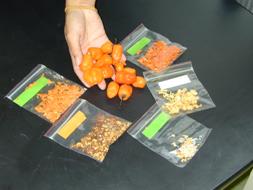 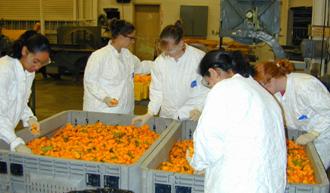 The results of the study indicate that habañero peppers contain significant amounts of capsaicin and dihydrocapsaicin and employing an efficient solvent extraction technique can help increase yields.

These results can be used to conduct subsequent research on SCFE as an environmentally friendly, product specific alternative extraction method for capsaicin recovery. In addition, a CO2 gas anti-solvent (GAS) method will be developed to enhance recovery levels.