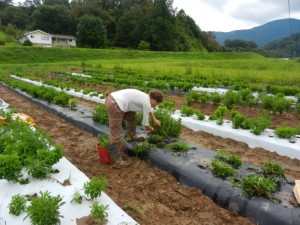 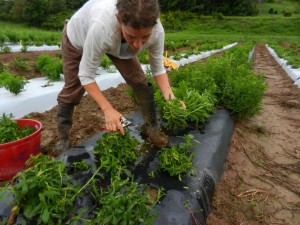 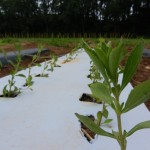 Stevia (Stevia rebaudiana) is an increasingly popular natural sweetener that has been embraced by health conscious consumers around the world. Presently, much of the stevia is grown overseas in countries such as China, India, Paraguay, and Vietnam. During the past few years, however, several large corporations have begun producing stevia in the United States, including in eastern North Carolina. There are reasons to believe that there could be benefits to growing stevia in the western mountains of North Carolina where temperatures are cooler and disease pressure may be less. To examine the feasibility of growing stevia commercially in western North Carolina, a study was established in 2014 at the Mountain Research Station in Waynesville, NC. It will be repeated in 2015. In this study stevia is being grown from transplants planted in spring after most risk of frost is past. Plants are set in double-rows on raised beds with drip-irrigation. The experimental design is a split-split plot with mulch as the main treatment (black plastic mulch, white plastic mulch, and bare ground), plant population as the first subplot (in-row spacings of 6, 12, and 18 inches), and harvest as the second subplot (once over harvest and two harvests per season). There are four replications. We monitor the plots for disease and insect damage, collect yield data, and have the leaves analyzed for glycosides. Winter survival will also be assessed but we do not expect stevia to survive most winters in this environment.

This first set of pictures shows the field with the black plastic, white plastic, and bare ground treatments (left). The stevia transplants were provided by Sweet Green Fields. These are the same transplants provided to their commercial growers so we can make direct comparisons with their production in the eastern part of the state and elsewhere (middle). A water-wheel transplanter was used to set the transplants on May 5, 2014 (right).

The plants looked strong and healthy in mid-July.

The first harvest for the two harvest per season treatment took place on July 22, 2014.

Plants were chopped and then dried in our large medicinal herb dryer at about 100 degrees F with high air flow (left and middle). Plants continued to grow well throughout the summer (right).

The final harvests for both harvest treatments took place in early September.

Stevia is native to South America and is not a hardy plant. It was damaged by the frost in early October.

We wanted to see if stevia would overwinter in our environment, so we mulched the beds with straw.

The plants did not survive the winter (left and middle). These first year results (right) show that the yields were increased by applying plastic mulch and using the closest plant spacing compared to bare ground and the two wider plant spacings. And the two harvests per season treatment produced almost twice the yield of the single harvest treatment. This study is being repeated in 2015.

Originally, we planned to replicate the 2014 study in a new location at the Mountain Research Station. As in 2014, the stevia transplants were provided by Sweet Green Fields. This company contracts with growers in eastern NC and Georgia and agreed to provide us with the same transplants for this study as they provide to their commercial growers so direct comparisons could be made. Unfortunately, higher commercial acreage was planted than was expected and there was a shortage of transplants. We received much fewer transplants than expected and were forced to modify our study. The modified field study consisted of comparing the best treatment from 2014 (white plastic with 6” spacing) with the bare ground treatments (6, 12 and 18” spacing). There were four replications.

Plants were transplanted with the aid of a water-wheel transplanter. The plants in the plastic mulch and bare ground treatments looked very healthy early in the season. The field was kept irrigated and fertilized by the research station staff. Project staff kept the bare ground plots weed free and scouted the fields twice each week for insects and diseases. Data were collected on plant growth and presence of insects and diseases.

In early July, Septoria leaf spot was found and diagnosed by the NC State University Plant Disease and Insect Clinic. The initial outbreak was spotty but within a short time all of the plants in the field were infected. There were no treatment (spacing or mulch) differences. After consulting with field representative at Sweet Green Fields and plant pathologists familiar with the crop, we learned that many fields in the Southeast region were infected with this disease and that it likely originated on the seedlings in the greenhouses. As stevia is a new crop to the region and there is not a disease management protocol, a rapid course of action was not an option.

Plant growth on in early to mid-August.

In the first year of this study, we compared two harvests per season with one harvest. We suspected that we could have obtained a third harvest. The plan for 2015 was to compare two harvests to three harvests. Plant growth in 2015, however, was much slower than in 2014 and with the compounding factors of the Septoria leaf spot disease and a damaging wind storm, we were only able to conduct one harvest on August 24th when 10% to 15% of the plants per plot were in the button stage of flower.

Our objective was to determine if stevia could be grown commercially in western North Carolina. With the current germplasm available, our conclusion is that stevia would not be economically viable for large-scale, wholesale production in western North Carolina. There is, however, a local market for direct sales of stevia to small natural product manufacturers. There is also the opportunity for farmers to make their own value-added products with stevia, including extracts and teas. The yields we obtained in this study would be adequate for those purposes. Nursery sales of plants for home gardeners is also quite feasible.

There is interest in developing stevia further. Until quite recently, much of the stevia research and development has been proprietary. Growers have not be able to access any of the new varieties or lines developed unless they are contracted to grow for those companies. But NC State University researchers in the eastern part of the state have been working on stevia since 2011 and are working to establish a large multi-state, multi-disciplinary project to expand their efforts.