New blackberry cultivars offer potential for the economic development of the blackberry industry in eastern North Carolina. The high value and marketability of this crop make it ideal for growers wishing to diversify and supplement farm income. By identifying varieties that are suited to conditions in eastern North Carolina, this research will enable farmers in the region to produce this promising specialty crop effectively and profitably.

Several blackberry breeding programs both in the United States and abroad have recently released a number of new cultivars. These cultivars offer potential for the economic development of the blackberry industry in eastern North Carolina. However, these cultivars are developed in environments and using production systems that differ from those existing and presently used in North Carolina. Our objectives were therefore to test these cultivars on a small scale before recommending them for commercial plantings in this region.

Current production of blackberries in North Carolina is limited, but there is growing interest in this high-income specialty crop as consumer demand for a quality local supply increases. Blackberries offer growers an excellent potential for profit, having both high value and great market potential; an established bramble planting can net $2,000 or more per acre. Blackberries are being sold in North Carolina markets as “gourmet berries” for $3 or more per ½ pint. Test marketing of this crop by SCP NCDA Marketing Specialist, Nick Augostini, indicated that a market exists at grocery chains, gourmet restaurants, and farmers markets. Because North Carolina produces berries at a time when supplies are low nationally, prices remain high throughout our production season, and a national market therefore exists for NC blackberries. In addition to the above outlets, berries can be sold to processors, at pick-your-own locations, and pre-picked at farm stands.

In the spring of 2000 we planted 7 cultivars (Triple Crown, Kiowa, Arapaho, Apache, Chickasaw, Black Butte and Navaho) in a replicated trial at the Cunningham Research Station in Kinston. Two additional cultivars were added in 2001 (Chesapeake and qde-1). Yield data was collected in 2001 and 2002, including fruit marketable and total yields, and fruit size. Fruit was harvested twice a week. Marketable fruit was picked into quart or pint clamshells. Cull fruit was picked and placed in gallon buckets. Each clamshell and bucket was weighed to determine total marketable and cull fruit weight. In addition, 25 berries were weighed to determine average fruit size.

Post harvest life of each variety was evaluated at least twice each season. Clamshells with just picked fruit were randomly chosen and placed in a 35F cooler. Post harvest color, firmness, flavor and overall ratings on a scale of 1-5 (1=poor, 5=excellent) were assigned to blackberries held in cold storage. These ratings were taken at 0, 24, 48, 36 hr and 1 week after harvest.

We harvested the first fruit from this planting in 2001. The first crop is traditionally considered the ‘baby” crop as the plants have not reached their full growth potential. However, the planting was unexpectedly precocious and yields were in general very high. Yield per plant ranged from 2.2 lbs/plant (Black Butte) to 19.3 lbs/plant (Chickasaw). The excellent vigor of this trial can be attributed to planting into land fumigated and covered with black plastic, excellent growing condition in general in North Carolina and ideal conditions at planting (rainy and overcast).

In the second year, a small army helped harvest the fruit and yields again were very good. Yields ranged from 6 to 47 lbs/plant. Yields were averaged over the two years and converted into lbs/acre (Figure 1). We conclude that most of the cultivars tested in this trial do very well and will be recommended for planting in eastern North Carolina.

Marketing surveys (taste tests) were conducted at the SCP Field Day and at the Raleigh Farmers Market by Nick Augostini. When asked to choose their favorite of 4 different varieties at the Farmers Market, 30% chose Kiowa, 28% chose Navaho, 25% chose Chickasaw and 17% chose Shawnee. At the SCP Field Day in 2001, 44% chose Triple Crown, 40% chose Apache and 16% chose Chickasaw. These results do not indicate that there is a strong preference for any one cultivar. This “non-preference” will enable growers to successfully market a number of cultivars that ripen over the season to their clientele.

Challenges:
As the first harvest season progressed (2001), several diseases began to manifest themselves, including an outbreak of orange rust and virus-like symptoms on numerous plants. Rust disease was first found on an adjacent planting of raspberries and spread quickly to the blackberries. Several whole plants had to be removed in order to minimize the spread. In addition, Black Butte was eliminated from the trial due to poor fruit production in the first year. The plant was extremely vigorous but very few flowers and fruit were produced. Fruit that was harvested was of extremely poor quality.

In 2002, numerous plants tested positive for multiple viruses. Arapaho had a lower than normal leaf area to support potential fruit load and crown gall was present in most of the root systems. All cultivars with symptoms and healthy plants were tested for multiple viruses. Four viruses, Tobacco ringspot virus (TRSV), tomato ringspot virus (ToRSV), raspberry bushy dwarf virus (RBDV) and impatiens necrotic spot virus (INSV) were found alone or in combination with other viruses in most plants sampled. The lack of normal primocane renewal growth in affected cultivars necessitated the cessation of this study a year early. A separate project involving virus indexing and propagation of blackberry plants is underway and should help to eliminate this type of problem in the future.

This project has been very useful in several respects. First, we have been able to witness the growth and productivity of these new varieties over the past few years. We now know in great detail the advantages and disadvantages of each variety. All cultivars tested in this trial except Black Butte and Shawnee are recommended for panting in eastern NC. Second, data and observations that have been collected for these varieties have been shared at over 15 meetings in the past 3 years. These meetings include agent trainings, NC grower meetings, county meetings held by agents, the Specialty Crops meeting in the Upper Piedmont, master gardener meetings, and national grower meetings (NABGA). Thirdly, at least 2 growers have initiated new plantings as a result of these meetings. However, disease pressures and virus problems did limit the enthusiasm of recommendations to establish new plantings. Therefore the final and most significant impact is the establishment of a source of clean virus-indexed plants. A new blackberry nursery in NC has been established that will propagate and sell virus-indexed plants. These plants should be available in large quantities in the next year. The number of new growers is expected to continue increasing now that a clean plant source has been established.

This project was at the Cunningham Research station for the past 3 years. Each year it was one of the stops on the Specialty Crops Field Day programs. Attendance at this stop was always very high. Clientele were able to sample fresh fruit, see a trellis system and, in the last year, see the impact of diseases on the planting. 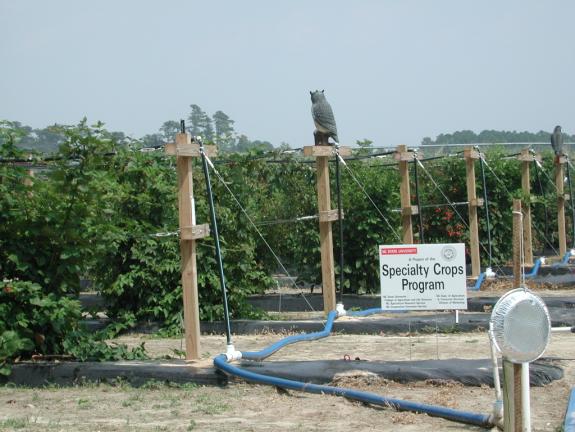