The purpose of this study was to evaluate Romaine and head lettuce varieties for the contract bag salad lettuce market. This work was done in the eastern part of the state with the aim of offering growers another crop for diversification opportunities. Growers and processors are adopting much of this information at this time.

Lettuce has a long history in Eastern NC. Commercial production thrived in the Wilmington area during the late 1800’s through the 1950’s. Interest in lettuce has emerged again with the need of bagged salad plants to source lettuce continuously from the east coast. Romaine per capita consumption has increased from 3.8 lbs in 1990 to 8.7 lbs in 2003. East coast Romaine is in great demand due to high shipping costs that are over $4.50 a carton from the west coast and the fact that eastern grown romaine actually is less perishable. The objective of these trials is to identify Head and Romaine lettuce varieties are adapted to North Carolina’s winter-spring and fall seasons and produce high yields and quality. High yielding large framed, high-density lettuce varieties are a key to making the salad plant deal work. High tonnage is a key and these larger framed varieties are capable of producing stripped heads that yield over 1.25 lb per head. These varieties are often not suitable for fresh market production because of their size.

Research both spring and fall took place on The Cunningham Research Station. The soil type was a Norfolk Fine Sandy loam. Both a winter-spring crop and a Fall Crop were grown in 2003.

Winter-Spring: Soil was turned, disked, chiseled on March 2003 and 350 lbs of 13-0-45 was applied on March 14, 2003. A standard plasticulture cultural regime, employing black and drip irrigation was employed without the use of a fumigant. The crisp head and romaine varieties both pelletized and non pelletized seed were sown into 288 cell polyethylene trays (TLC Polyform, Nova 288, Morrow, Georgia) using Carolina Choice Plug Mix (Carolina Soils, Inc, Kinston, NC) and grown in the greenhouse for 4 weeks and hardened off for a week before transplanting to the field on March 18, 2004. Lettuce was set at 12″ intervals in 2 rows along the beds. The experimental design was a randomized complete block with six replications. Plots were 15 ft long.

Harvests on the crisp head lettuce were on May 16 and May 20. Head lettuce is considered mature when the heads feel very firm to the touch. Heads were cut weighted, then stripped of the outer wrapper leaves, weighted again, decored and then weighted again. All salad plant lettuce is stripped in the field. This consisted of removing the outer wrapper leaves. The core is considered waste thus small-cored varieties are advantageous. The 1st romaine trial was harvested on May 13 and 14. Romaine is considered mature when the top leaves start closing.

Fall: Soil was turned, disked, chiseled on March 2003 and 500 lbs of 10-10-20 was applied on September 2, 2003. The cultural regime was plasticulture was utilized. Using a conventional mulch machine methyl bromide (98%-2%), chiseled into soil at a rate of 165 lbs/acre, soil pulled into raised beds, drip-line laid and covered with black plastic mulch. Test variety transplants with a root ball volume of .63 cubic inches were grown in New Jersey by Sheppard Farms of Cedarville, New Jersey. They were transplanted on September 16, 2003. Lettuce was set at 12″ intervals in 2 rows along the beds.

The experimental design was a randomized complete block with three replications. Plots were 10 feet long and contained 20 plants

Harvest of the crisp head trial was on October 11 and 12. Four feet containing 8 heads was harvested and processed (stripped and decored) in the same way as the spring crop. The Romaine was evaluated and harvested on October 6. Most of the romaine varieties bolted. Eight plants without emerged flower stalks were selected in each plot (if available) and weighted. Four plants were selected and measured for height, then cut and the seed stalk length measured.

Winter-Spring Table 1: 3SS98 produced a stripped head of 1.34 lbs and although it was not significantly different from the other lines in the test it produced the highest unstripped weight, though this was not significantly different from the lines 3SX103, 3SX107 and 3SX113. 3SS98 and 3SX113 did produce unstripped head weights great than the standard Maverick II.

Winter-Spring Table 2. Romaine Variety Trial 2003: Green Towers and Ideal were the highest performers in this trial with regards to weight per plot and average head weight at the 10% level of significance.. Tip burn was high due to lack of irrigation at the station over a weekend. The butt diameter was smallest in Ideal and Thermacos. Ideal was the tallest romaine is Ideal and the shortest is Thermacos.

Fall Table 4 Romaine Lettuce: At the time of harvest Siskiyou, 3SX411, 3SX412 and Apollo exhibited little bolting but the seed stalk elongation exceeded the specifications of most of the processors except for the Siskiyou, which was marginal. Siskiyou had not bolted when observed ten days later whereas all of the rest of the lines in the trial had expressed visible flower stalks. These transplants were grown in southern New Jersey, which is apparently too far south to consistently avoid bolting. To avoid bolting, lettuce seedlings for transplant need to be grown for the first 3 weeks at temperatures below 80 F.

Romaine and crisp head lettuce production is a fact in Eastern North Carolina. Several large companies are involved in making it happen. This spring over one hundred acres of lettuce was planted in Eastern North Carolina and harvest is on going. Romaine is the driving force and my research will concentrate on this in the near future. The other area is developing and adapting high population systems to Eastern NC. Bare ground culture will be the emphasis except on the earliest plantings in the spring where growers can double and triple crop with other vegetables in plasticulture systems.

The romaine variety Siskiyou is being used on a trial basis is 2004 by several growers this spring. Mighty Joe, Javelina and several others of the varieties we “discovered last fall will be used on the fall crop in 2004. Progress is being made toward developing commercially viable lettuce production in Eastern North Carolina based on adapted varieties and research based production practices.

Thanks go to Sheppard Farms of Cedarville, New Jersey that furnished the transplants for the fall tests. Kenneth Dubas of 3 Star Lettuce LLC and Pieter Westerbeek Jr of Seminis Vegetable Seeds for furnishing the trial varieties. Many thanks go to the grower cooperators. Many thanks go to the NC Gold Leaf Foundation for their support of the NC Specialty Crops Program, which makes this work possible.

Thanks to Brad Taylor, Agricultural Research Technician for his diligent work and excellent effort. Thanks go to Keith Tyson the Specialty Crops Technician for his picture taking and efforts in making this project a success. Thanks to the members of the Cunningham Research Station Team for all of their good care and assistance. 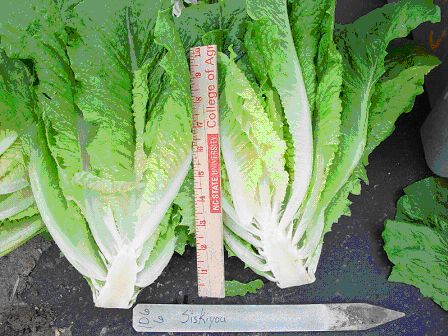 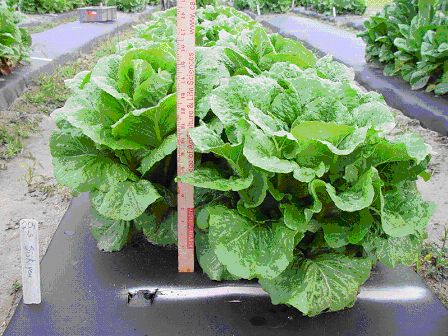 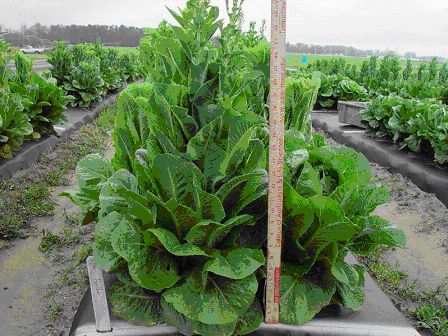 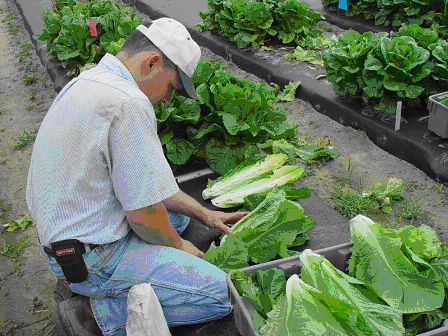 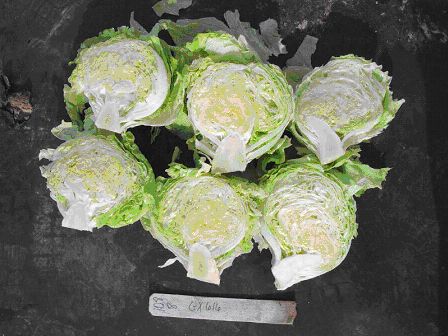 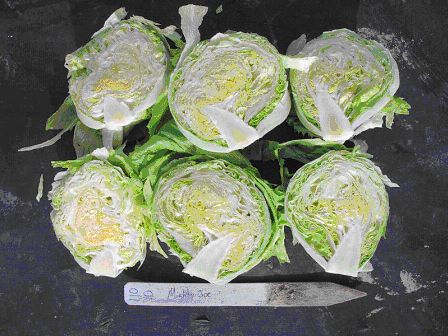 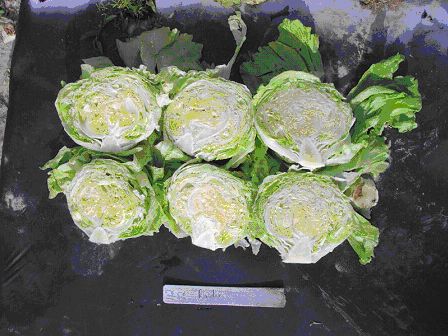 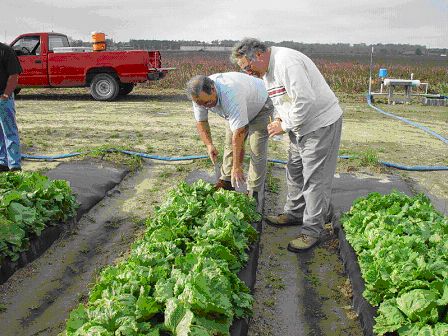 Tom Sheppard and Bill Jester determining when to harvest. 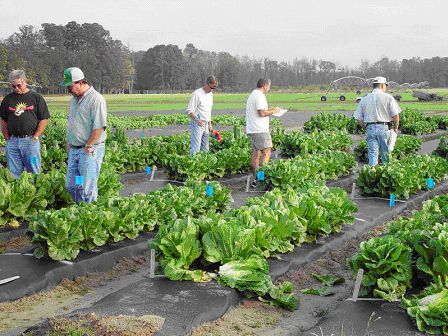 Farmers, Brad Taylor, and Station personnel during the Fall harvest. 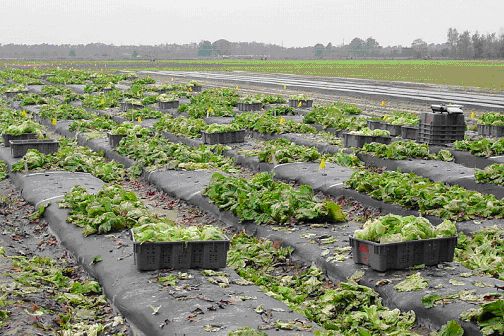