The growing Asian and Hispanic segments of the U.S. population represent an expanding market for specialty vegetables. The so-called “Boniato-type” sweet potato is a popular crop among these ethnic groups, but is not typically grown in the U.S. This study was designed to assess the suitability of various boniato-type sweet potato varieties for production in North Carolina. Eighteen varieties were evaluated based on measures of quality, yield, appearance, and disease susceptibility. The cultivar ‘Japanese’, a variety for Asian markets, was found to be the most promising. The cultivar ‘Picadito’, suitable for Hispanic markets, shows limited adaptation to NC growing conditions. Through appropriate selection of cultivars and attention to the disease susceptibility of each variety, North Carolina growers can become leading producers of these specialty sweet potatoes.

Over 40 plant introductions and breeding lines have been evaluated and rejected over the past four seasons. This year’s yield test included 20 clones, 12 from the North Carolina State University breeding Program, one from Japan, two from the Philippines and five known cultivars. The test was grown in two locations, the CRS in Kinston and HCRS in Clinton. Yield data was not taken at Clinton due to very low yields and high variability from rep to rep. The frequent rainfall produced a severe yield gradient in much of our plantings at the HCRS this year. The tests were graded for yield by No.1, canner, jumbo and cull classes and evaluated for horticultural characteristics including maturity, shape, shape variability, skin color, flesh color, eyes, lenticels, diseases present, length/diameter ratio and overall appearance. All of the clones were also entered into our disease screenings for root knot nematodes, Fusarium wilt and pox.

Eight of the 12 NC State lines were dropped due to poor adaptation, poorly shaped roots, significant appearance problems (such as cracking, skin discoloration, etc.), and low yield. Of the four remaining, two are white skinned, one red and one pink skinned like ‘White Delite’. All will be re-tested next year to see how consistent they are over a range of growing conditions. Three are resistant to both Fusarium wilt and the southern root-knot nematode. The fourth is resistant to Fusarium but susceptible to nematodes. The SSR or pox test is being rerun in the greenhouse, after the first one failed. Due to the rainy summer, our field SSR trial produced only a very low disease incidence and was not rated. None of these new clones have been tested enough to replace the clone ‘Japanese’ which was identified by this project earlier as the best cultivar currently available for NC growers. The Japanese and two Phillipino clones in this year’s trial were discarded for poor adaptability. Selected clones and their yield and appearance ratings are included in tables 1-3 below.

The most popular Boniato-type sweet potato is ‘Japanese.’ However, one of the weaknesses of ‘Japanese’ is its susceptibility to russet crack. It declines rapidly for yield and appearance making the use of clean stock very important. One of our goals for this year was to clean up ‘Grand Asia’ which is similar to ‘Japanese’ since we have not seen russet crack expressed in this clone, however meristemming was not enough to clean it up in time for this season’s test. Yields were comparable to G3 ‘Japanese’, and we are still pursuing clean ‘Grand Asia’ for evaluation. No russet crack was observed in any of the clones selected for further testing.

The main cultivar used for the Hispanic market, ‘Picadito’, performed poorly in both locations, with an appearance rating of 2 (out of 10) in Kinston and 1 in Clinton. Shapes were long and irregular shaped, and heavily veined. It was the lowest yielding line that was measured in this test. We do not recommend this clone for NC growers because of its poor adaptability.

Taste tests are planned for the beginning of the new year. The dry matter of the NC State material is considerably lower than either ‘Japanese’ or ‘Picadito’, 22-27% versus 30-31%. Dry matter is related to texture to some extent, with higher dry matter lines tending to have drier textures. The culinary quality will be compared to the standards and lines dropped if not suitable.

The best available sweet potato cultivar suitable for Asian markets in NC is ‘Japanese’. ‘Picadito’ is the most widely grown cultivar for the Hispanic markets, but it has limited adaptation to NC. Both are susceptible to root knot nematodes and soil rot or pox disease. ‘Picadito’ is also susceptible to Fusarium, while ‘Japanese’ is susceptible to russet crack. Because of the disease susceptibilities, each variety should be grown with a sound rotation program and clean planting stock. Virus-indexed micropropagated plants are available from the NC State Micropropagation unit. Contact Zvezdana Pesic-VanEsbroeck at 919.515.7781.

In order to take advantage of the growing Hispanic and Asian markets for sweet potatoes, NC growers need adapted cultivars suitable for these markets. Last year at least eight growers grew ‘Japanese’, ‘Picadito’ or both with an acreage estimated to be greater than 300 acres. One grower produced 200 acres of Japanese for use as chipping stock in addition to the fresh market. We believe that the potential for these markets has not been reached and that, given suitable cultivars, NC could be a leader in the production of these types of sweet potatoes. 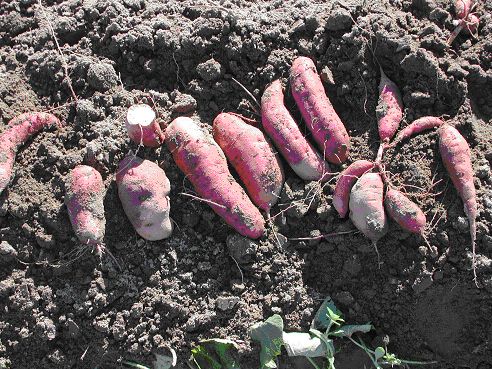 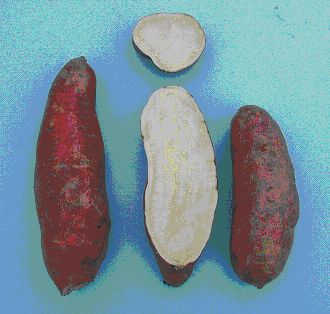