Investigations Into the Feasibility of Pyrethrum as a New Industrial Crop for N.C.-2002 Report

North Carolina growers are looking for agronomic crops to supplement tobacco, soybeans, and cotton. Pyrethrum has great potential as a new industrial crop, and we have sought to determine whether it can be grown successfully and profitably in NC. Initial research has shown that more work is needed to develop cultivars of pyrethrum for our region that have suitable yield, quality, disease resistance and hardiness.

In 2000, transplants of three cultigens of pyrethrum were planted at the four research stations in the western mountains, northern mountains, piedmont, and coastal plains of N.C. The cultigens were obtained from Germany, Chile, and Holland. At the Cunningham Research Station in Kinston, the plants were grown on raised beds with black plastic mulch and drip-irrigation. At the other three locations, the plants were grown on raised beds with overhead irrigation without plastic mulch. The flowers were harvested for the first time in 2001. Plants were trimmed back to a height of 6 inches and allowed to overwinter.

In 2002, a large number of plants did not live through the winter at the Upper Mountain Research Station near West Jefferson or at the Cunningham Research Station. At the Cunningham Research station, splits from healthy plants were used to fill in some of the gaps where plants had died. At all locations, the plants were fertilized and irrigated. Flowers were harvested by hand, weighed, dried, and analyzed by a cooperating U.S. pyrethrum product manufacturer. An international pyrethrum consultant was hired to help assess the future of pyrethrum for North Carolina based on these research plots.
RESULTS
In 2001, flowers were harvested for the first time. Flower yields were higher than the minimum needed for commercial viability (100 per plant) at all sites but varied considerably from site to site. The highest yields were obtained at the Piedmont Research Station in Salisbury. Pyrethrin content of the flowers, however, was too low from any of the plantings for the flowers to be of any commercial value. Experts in the pyrethrum industry theorized that this was probably due to the young age of the plants and our inexperience in harvesting and handling pyrethrum flowers. They suggested that we continue our studies for at least another year.

Although the consultant had been quite impressed with the photographs he had seen of the 2001 plots in full flower, he was disappointed in the 2002 crops. His assessment is that the germplasm we have is not appropriate for commercial production in North Carolina. Unfortunately, he does not think there is a commercially available variety that would be appropriate for our location. He wrote a report outlining how we could attempt to improve the existing germplasm to increase flower yields, winter survivability, disease resistance and a commercially acceptable level of pyrethrin yield of about 18 lb/acre.

Pyrethrum will take many more years of development before its true potential as a large-scale, industrial crop for North Carolina can be evaluated. We have scaled back the pyrethrum studies to one location to begin selection for winter hardy, disease resistant, high-yielding plants with acceptable flower pyrethrin levels.

North Carolina growers are looking for agronomic crops to supplement tobacco, soybeans, and cotton. Many growers had researched pyrethrum and wanted to know if they could grow it and sell the flower extract. Based on the results of these studies, growers should be advised against attempting large-scale production of pyrethrum at this time. As a result of these studies, some growers who were considering growing pyrethrum will look at other crops instead. 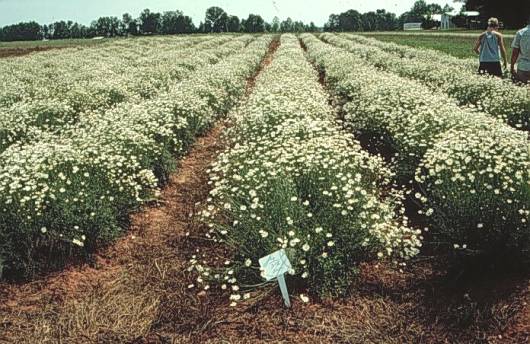 Pyrethrum in full bloom at the Piedmont Research Station in 2001. 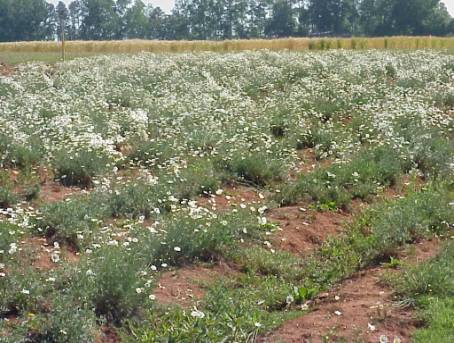 Pyrethrum in full bloom at the Piedmont Research Station in 2002.