A Project of the NC Specialty Crops Program

In an effort to find innovative new ways to keep agriculture in North Carolina profitable, NC State University has been involved in developing a variety of agri-tourism efforts. One of the most successful of these enterprises has been cornfield mazes. A cornfield maze is a field of corn, usually 6-8 acres, into which has been carved an intricate design. People pay an admission charge for the opportunity to walk through the maze. Some mazes are educational, some are just fun, some are “haunted” for Halloween. Cornfield mazes are popular with families, church youth groups, school groups, and youth camp and daycare programs. Several local North Carolina mazes are highlighted at http://cornfieldmaze.com.

To build on the success of the cornfield mazes, we are interested in trying to build mazes of other agricultural crops. An apple grower in Alexander County wanted to build a sunflower maze. Working with the NC Specialty Crops Program and his county extension agent, in 2001 this grower established a sunflower maze on his farm. Since this was the first of its type in the state, we had many questions about how to do it. For example, what variety of sunflower should we use? How far apart should we plant the sunflowers? When should the sunflower seeds be sown? To help answer some of these questions, we conducted a study. 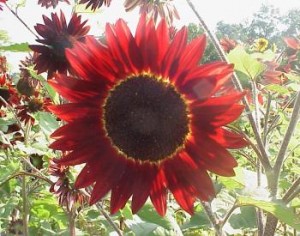 How experiment was conducted

Two sunflower types, an oil type, Pioneer Hybrid P63A81 and a confectionary type, Pioneer Hybrid 6946, were planted at three densities (25,000, 30,000, and 35,000 seeds per acre). The oil seed type, planted at the three densities, was also intercropped with sunhemp from Peaceful Valley Farm Supply at a single density of 20 lbs/acre. Seeds were sown on June 16, 2001. There were four replications. 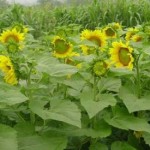 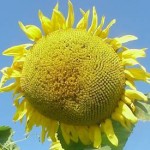 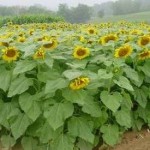 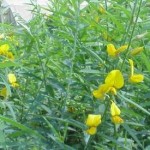 Data were collected on seedling emergence, plant height, leaf size, uniformity, and foliage density. For a maze, plant foliage needs to be dense enough to obscure viewing from one path to the next. In this study we measured this by inserting a large card with red, white, and blue bands into the foliage at 5′, 10′ and 15′ from the path. An observer in the path indicated how much of the card could be seen at each distance.

The sunflowers drew lots of attention. People loved them and had to stop and look at them. The oil and confectionary varieties are bred to produce large heads full of seeds. As a result, these heads drooped over very soon after full bloom. This would not be particularly attractive in a maze. But the sunflowers attracted hundreds of birds which could be used as a marketing advantage. The heads can also be cut and sold as natural bird feeders. Foliage does not stay attractive for long. Life of maze would only be a few weeks.

In 2002 we eliminated the sunflower sunhemp treatment and added a cover crop variety of sunflowers: Sun3703 from Johnny’s Selected Seeds. The oil, confectionary, and cover crop varieties of sunflowers were all planted at 25,000, 30,000, and 35,000 plants per acre. There were 4 replicants. Seeds were sown on July 23, 2002.

Data were collected on seedling emergence, plant height, leaf size, uniformity, and foliage density. For a maze, plant foliage needs to be dense enough to obscure viewing from one path to the next. In this study we measured this by inserting a large card with red, white, and blue bands into the foliage at 5′, 10′ and 15′ from the path. An observer in the path indicated how much of the card could be seen at each distance.

We planted the sunflowers in late July to see if we could have an attractive maze in the fall when maze activity is the greatest. Because of the day-length sensitivity of the varieties used, the plants quit growing when they were about 5 feet tall – not tall enough for a maze. Bloom was unaffected, however. The cover crop variety had a much smaller head than the other varieties and remained upright until the storm took it down. We noted that local cornfields were not destroyed by the storm showing the sunflowers are more sensitive to wind and rain. 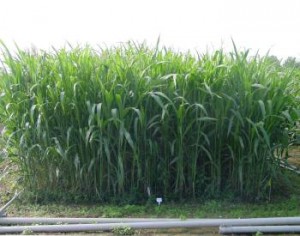 Sorghum was tried as a new maze plant. The variety, 4Ever Green from Walter Moss Seed Company, was planted at a rate of 35 lbs/acre. Three seeding methods were used. Broadcast, drilled one direction, and drilled in two directions. There were four replications. Seeding took place on June 18, 2002.

Until the storm arrived the sorghum showed great promise as a maze crop. We will try this again, reducing the plant density to see if the plants will develop stronger root systems and stems.