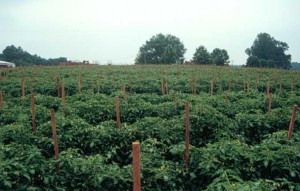 Over the past seven to eight years, growers and researchers have noticed an increase in the condition called ‘gold fleck’ which can develop on the surface of ripe tomato fruit. As the name implies, it looks like a light sprinkling of gold flecks in the top layers of the skin of the fruit. The condition is only noticeable on mature, red fruit. Usually, the amount of gold fleck is barely noticeable and does not affect the marketability of the fruit. In 1998, however, the incidence of gold fleck was severe in several areas of the country. Some loads of tomatoes shipped into North Carolina from the western U.S. and Mexico had up to 42% of the fruit affected. On some of the fruit, up to 75% of the surface area of the individual fruit was covered with gold fleck. The more severely affected loads were rejected due to poor fruit quality. In 1999, an increase in the amount of gold fleck was also reported by growers in North Carolina, South Carolina, and Florida.

Many growers, and several researchers, are of the opinion that gold fleck is due to use of high rates of the insecticide Asana. There are reports in the literature, however, that indicate that gold fleck is a genetic disorder. Asana and several new varieties of tomatoes have become very popular in use over the same timeframe that the increase in gold fleck has been observed. The objective of this study was to determine if gold fleck is caused by Asana and /or is variety dependent.

The study was conducted at the Mountain Horticultural Crops Research Station in Fletcher, NC. The plants were grown in staked culture on raised beds, with black plastic mulch and drip-irrigation. Treatments consisted of three varieties (Mountain Fresh, Celebrity, and Mountain Pride) and four insecticide treatments (Asana XL, Karate 1 EC, Thiodan 50 WP, and water as a control). Mountain Fresh is a fairly new variety. ‘Celebrity’ was released in the mid 1980’s. ‘Mountain Pride’ has been in production for about 20 years. Asana XL (esfenvalerate) and Karate (lambda cyhalothrin) are broad spectrum pyrethroids. Thiodan (endosulfan) is an organochlorine.

The study was arranged as a factorial, randomized complete block design with four replications. The insecticides were applied at the maximum label rates four times during the growing season. The water (control) treatment did not receive any insecticides. The study was duplicated in early and mid-season plantings, field set on June 1 and June 16, respectively. Each plot was harvested four times. Only red-ripe fruit were harvested. 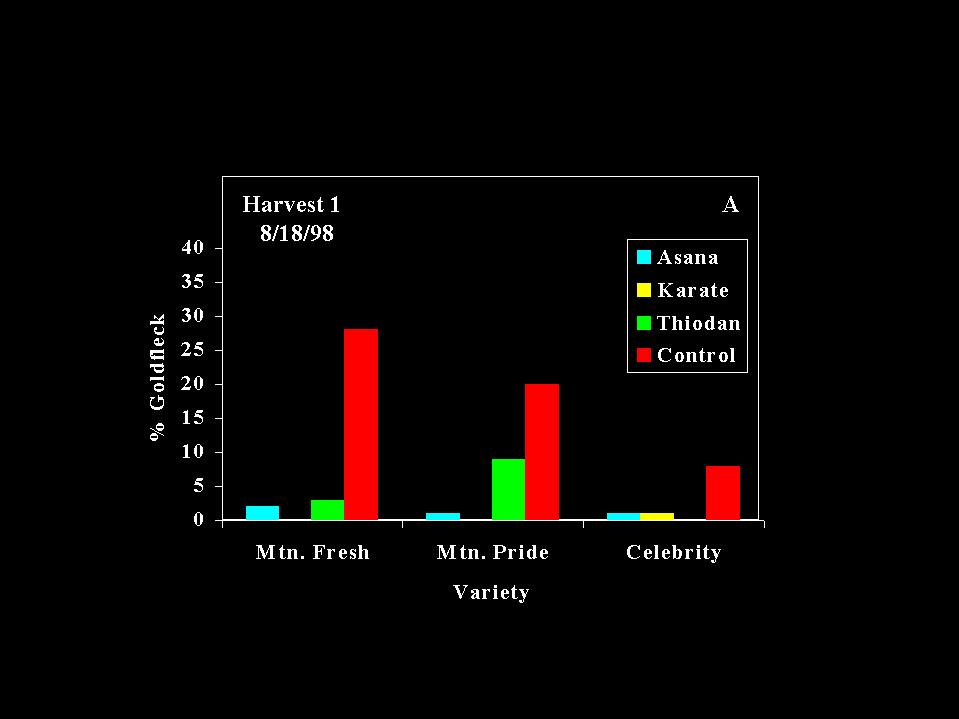 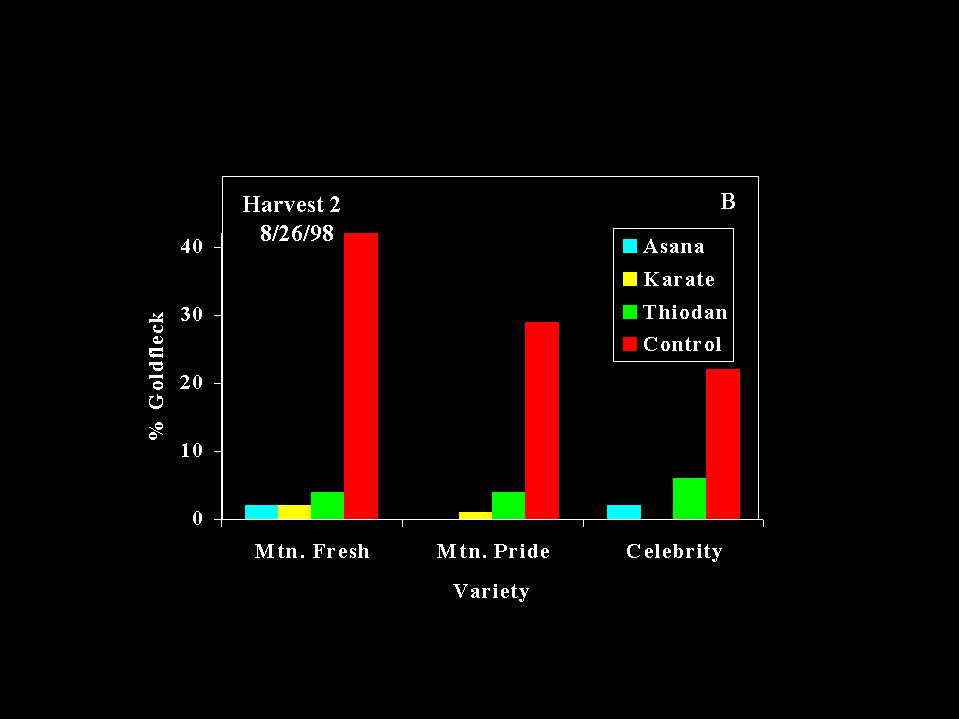 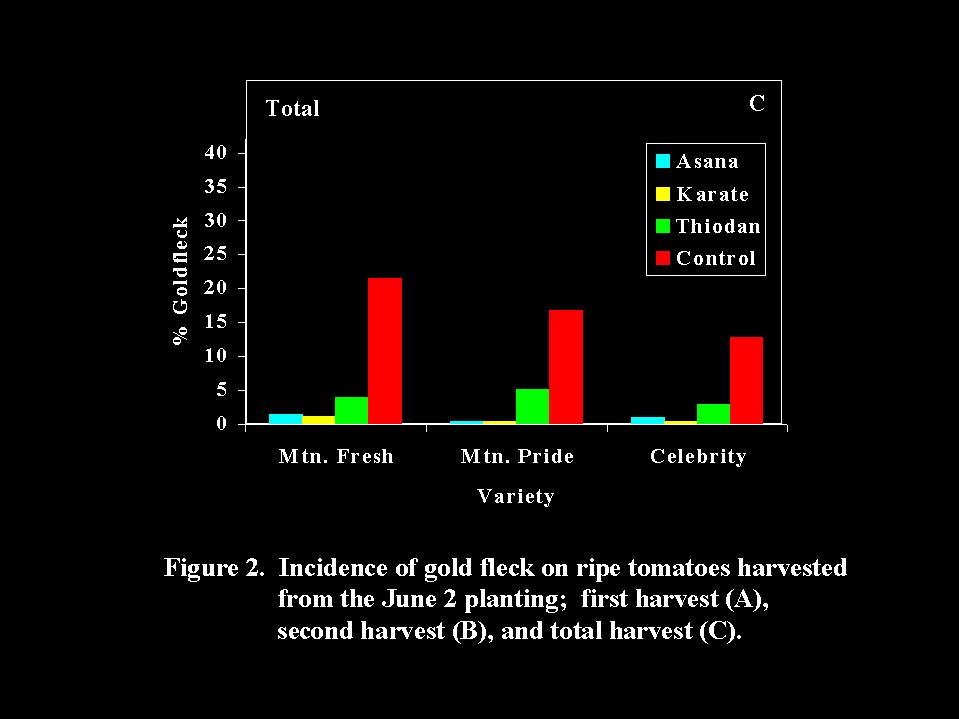 By the second harvest, there was a spray treatment x variety interaction (Fig. 2). Forty-two percent of the ‘Mountain Fresh’ controls were affected compared to 29% of the ‘Mountain Pride’ control and 22% of ‘Celebrity’ control. Only 0-6% of any of the insecticide treated fruit were affected. There was no difference between varieties when insecticides were applied.

For the total harvest of the early planting, both spray treatment and variety had significant effects (Fig. 3). Overall, 22% of the water treated (control) ‘Mountain Pride’ fruit had gold fleck. The control fruit, overall, had significantly more gold fleck than any of the insecticide treated fruit. There was no difference among the three insecticides. 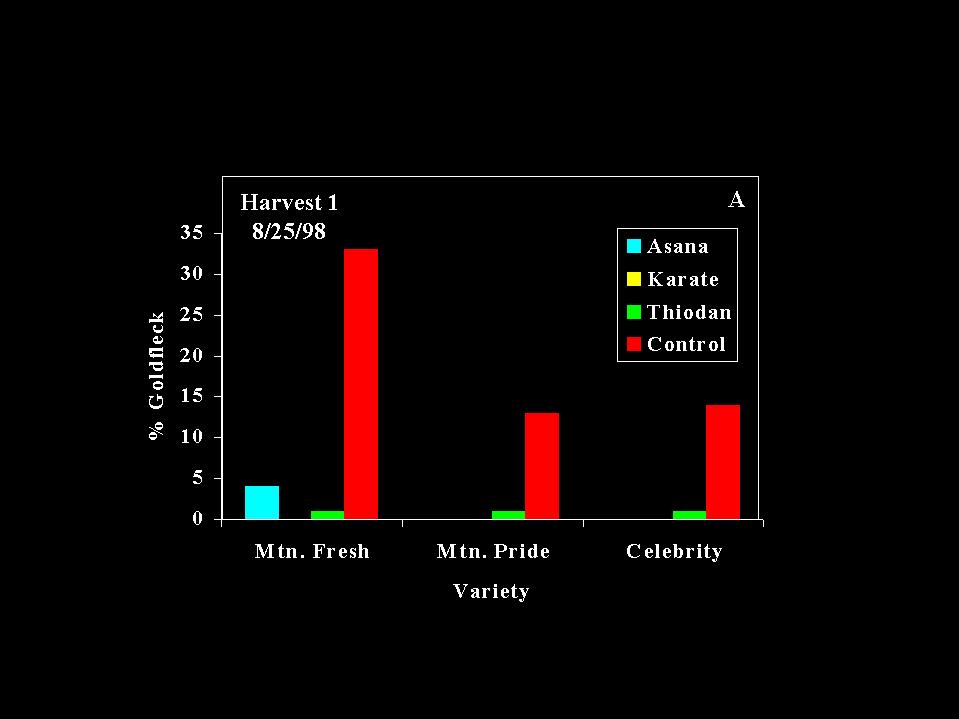 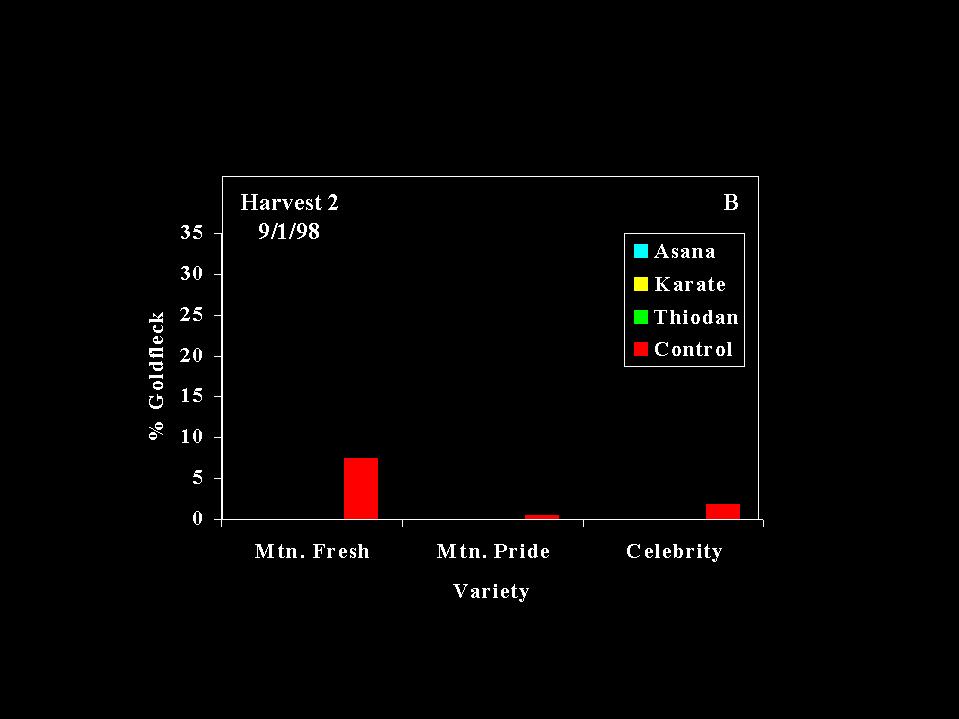 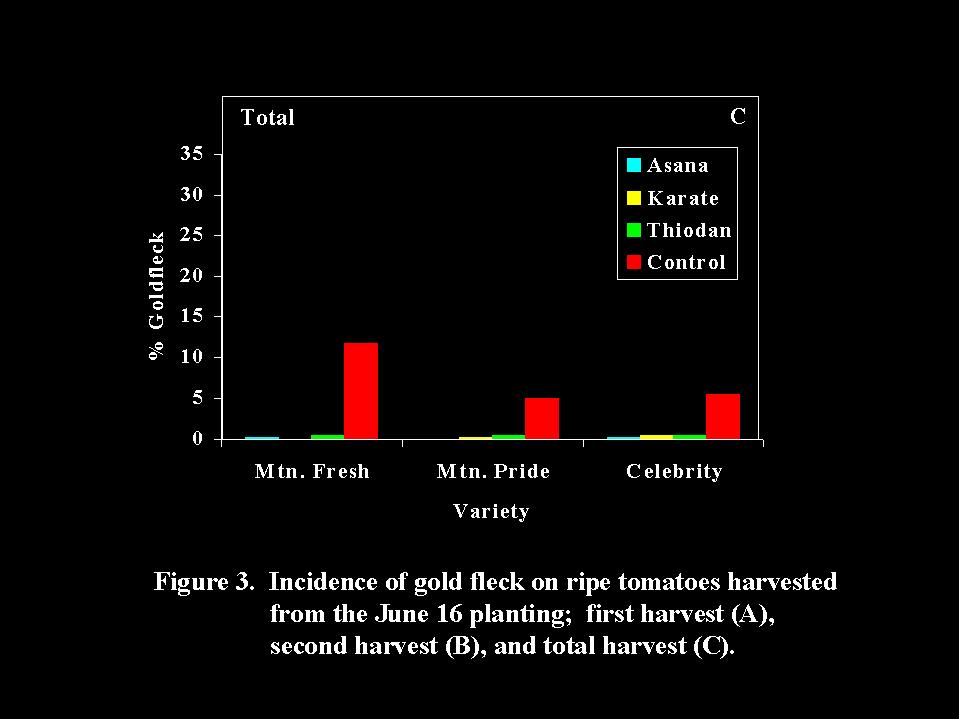 At the first harvest of the second planting, the water control had more gold fleck than the insecticide treatments and there was no variety effect (Fig. 4).

By the second harvest, the amount of gold fleck was greatly reduced but still only the controls were affected (Fig. 5). Seven and one-half percent of the control ‘Mountain Fresh’ fruit were affected compared to 33% the week before.

For the total harvest of the second planting, there was a significant spray treatment x variety interaction (Fig. 6). ‘Mountain Fresh’ had more gold fleck than the other varieties, but only when not sprayed with an insecticide.

In both plantings, the untreated controls had more gold fleck than plants treated with an insecticide. There was, however, more gold fleck in the early planting than the late planting. In both plantings, the incidence of gold fleck also decreased with time. Because there was so much gold fleck on fruit not treated with insecticide, and because of the definite time factor, I suspect an insect is at least partly responsible for the damage. This is the focus of a study in 1999 being done in cooperation with an entomologist at the research station in Fletcher.

These results support field observations that the incidence of gold fleck is increasing. ‘Mountain Fresh’, the most gold fleck susceptible of the varieties tested, is also the newest of the three varieties and is widely planted. As the tomato industry has adopted IPM techniques, there has been a reduction in insecticide use in some areas in some years. Thus, there are fields of insecticide-free fruit, which based on the results of this study, are the most susceptible to gold fleck. In conclusion, this study clearly showed that the insecticide Asana is not responsible for gold fleck. Gold fleck was actually reduced where Asana was used compared to the control. Overall, there was a variety effect, but only when insecticides were not used. When grown without insecticides, ‘Mountain Fresh’ had more gold fleck than the older varieties, ‘Celebrity’ and ‘Mountain Pride’