Herbicide Carryover in Manure-Last of the Tomato Study Results

Find this article at:
go.ncsu.edu/readext?466696
— Written By Jeanine Davis

8/16/2010 – The past two summers some North Carolina farmers and gardeners reported plant damage due to herbicide carryover in manure and composted manure they applied to their farms and gardens. This is not a new issue; it has been a problem around the globe for many years with a certain class of herbicides. You can read more information about it in the leaflet and the links provided therein.

This summer, some gardeners in Asheville thought they had plant damage from some locally obtained composted manure, so we ran a test. You can get the full story on the situation, the test, and earlier results by reading the three previous posts on this blog from July 9, July 26, and July 29, 2010. Or just click on “herbicide carryover” in the labels section on the right sidebar of this blog.

Here are the final results from that study. These plants have been grown for seven weeks in a mixture of the composted manure with standard potting mix, in the potting mix with the suspected hay on top, and in just our potting mix. Note, the damage did not become apparent until the plants had been growing for five weeks! Also keep in mind that these plants have now been growing in these little pots for seven weeks. They are totally root bound. So even the control plants (in straight potting media) don’t look great.

with the Suspected Composted Manure 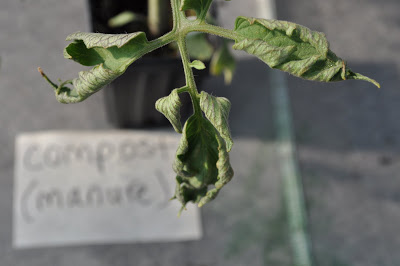 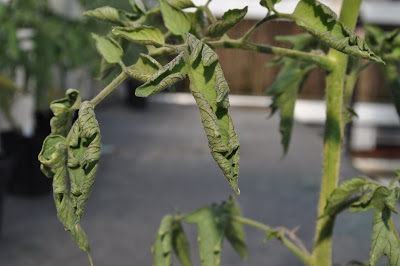 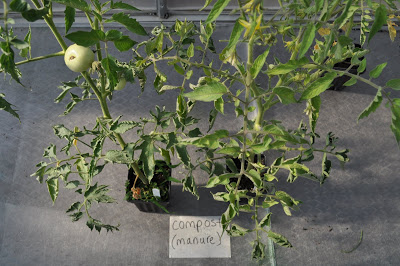 with the Suspected Hay 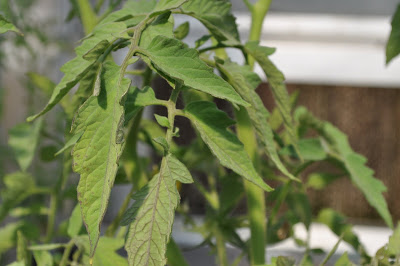 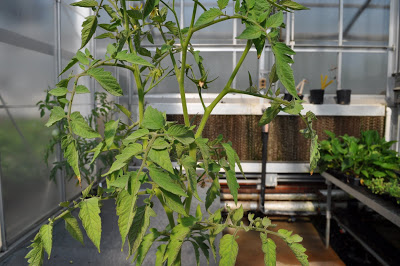 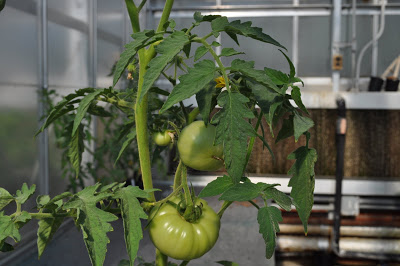 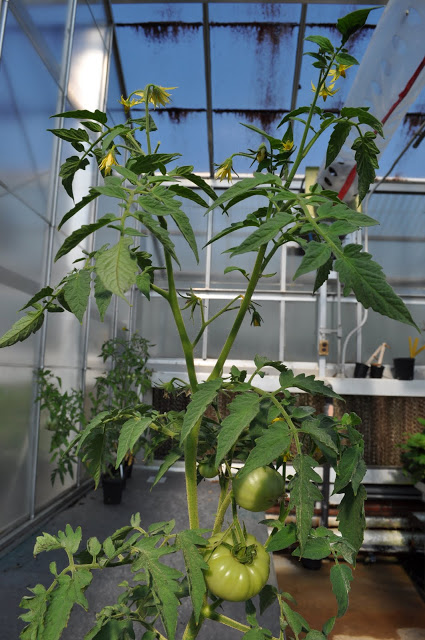 So, what’s the conclusion? There was something in the composted manure that seriously affected the tomatoes. We suspect it was herbicide, but without further testing, we can’t know for sure.
How can you prevent experiencing herbicide carryover damage yourself? First of all, talk to the people you get your manure or compost from. Ask them if they aware of this problem and what they do to prevent it. If there is any chance of the manure being contaminated, don’t use it to grow any sensitive plants (see the bulletin referenced above, but basically vegetables and flowers). And I strongly recommend that you grow some plants in the manure in pots first before applying it to the land. This takes some time (like five weeks), but would be one more thing you could do to ensure it is safe to use.
On a personal note, I am very upset about this. Adding manure and compost to your soil has amazing benefits; improving tilth, fertility, organic matter, and soil life. I would hate to see people quit using manure because these herbicides are so persistent. Not only would they lose out on the soil building benefits, but many horse owners are going to have manure disposal problems if they can’t give their manure away to farmers and gardeners. On my own farm, we do not have adequate pasture to get our animals through the winter so we have to buy hay. This year we are asking more questions than ever from the farmers we buy hay from. We are even considering asking them to sign a statement that they have not used any herbicides containing aminopyralid, clopyralid, or picloram. If all hay customers starting demanding this, we would see less use of these herbicides in situations where these problems can occur.
Aminopyralid was banned in the United Kingdom for a few years, but it has now been reintroduced with restrictions. To read more information on the topic visit ManureMatters.co.uk.
share Share This Article