Find this article at:
go.ncsu.edu/readext?466701
— Written By Jeanine Davis

9/6/2022 – I wrote this post twelve years ago and it is as relevant now as it was then…unfortunately. Here is our recently updated bulletin, too. AND BE SURE TO INVESTIGATE OTHER REASONS FOR PLANT GROWTH PROBLEMS AFTER APPLYING MANURE OR COMPOST, MOST NOTABLY, HIGH SALTS. CONTACT YOUR COUNTY EXTENSION AGENT FOR ADVICE.

7/26/2010 – Some home gardeners in Asheville suspected plant damage from some composted manure they had purchased. They wondered if it could be from herbicide carryover on hay that the animals who produced the manure had eaten. The producer of the compost was puzzled because she was very careful when she purchased hay, asking whether herbicides were used, and she had performed her own bioassays and everything seemed fine. The home gardeners were adamant, however, that the only plants showing the damage were the ones growing in the compost. So, the compost provider brought us large samples of the manure and hay. We took tiny tomato plants and planted them in the manure and with the hay. You can see pictures of those plants at time of planting and three weeks later at:
http://ncalternativecropsandorganics.blogspot.com/2010/07/results-of-bioassays-performed-on.html

Someone left a comment on that blog post saying we should grow the plants longer. They didn’t see damage on their own plants until much later. One of the home gardeners I was doing this study for said the same thing. He said to wait five weeks. So we waited.

Five weeks have passed. This morning, my technician, Amy Hamilton, checked on the plants and took these pictures. As you can clearly see, the plants growing with the composted manure are now exhibiting unusual growth. I asked the pathology technician in our building, who has examined thousands of tomato plants in her career, to take a look at them and without hesitation she said “herbicide damage”. I will have our pathologist and weed scientist also take a look at these plants because I am not qualified to make a definite diagnosis myself. But clearly, something is not right with these plants.

I am puzzled about why it took this long for damage to develop. We planted very tiny transplants into the mix of composted manure and potting media and they grew fine for a long time. But this also brings into question, at least to me, the bioassay procedures that we and others have in our publications on this topic. We don’t tell people to grow their test plants that long! I will keep you posted as we learn more. 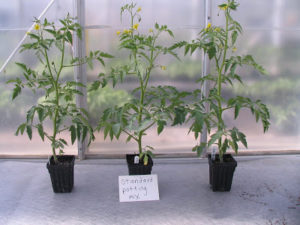 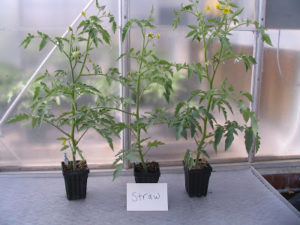 Tomatoes grown for five weeks in potting mix with hay on top (it says straw, but it is hay) 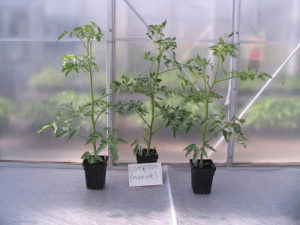 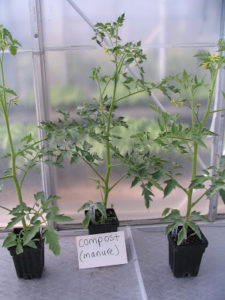 You can also see the results after seven weeks.