Find this article at:
go.ncsu.edu/readext?466702
— Written By Jeanine Davis
7/11/2022- I wrote this post over twelve years ago, but unfortunately, the information is just as important now as it was then. In the year of COVID-19, more people than ever grew gardens, and more people than ever were affected by herbicide carryover. I wish I could say the problem had been solved, but it hasn’t. I still want to encourage you to use manure, hay, grass clippings, and compost made from those materials, just do your homework. Know your sources. And run bioassays if there is any question. And here is a link to our recently updated bulletin.
*****BE SURE TO READ THE POST FROM THE FIVE WEEK AND SEVEN WEEK RESULTS. THEY ARE VERY DIFFERENT FROM THE THREE WEEK RESULTS IN THIS POST***** 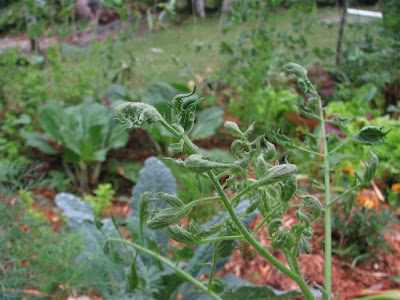 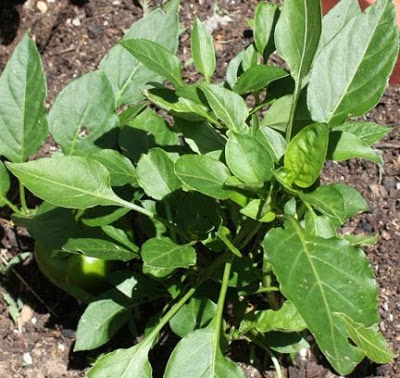 Damaged pepper plant (where manure was used) in Asheville garden
7/9/2010 – In early June, some home gardeners in a neighborhood in Asheville had peppers and tomatoes that were very twisted and odd looking. It looked very much like herbicide damage. They asked around their neighborhood and no one reported using any herbicides, such as 2,4-D, so they tried to figure out what they had in common. The common factor appeared to be manure they purchased from a local farmer. The previous summer, a local organic farmer suspected he had plant damage from manure obtained from the same farm. This was in the midst of all the reports of herbicide carryover (mostly aminopyralid and chlorypralid) in manure and compost. However, when the farmer who supplied the manure grew plants directly in the manure pile (in 2009) they grew fine! The manure provider, not wanting to cause damage to anyone’s plants, made special efforts throughout the year to ensure herbicide-free manure in 2010. In particular, all hay sources were questioned about herbicide use and bean bioassays were performed on the manure. So, this farmer was frustrated and discouraged when the manure was again suspected of causing damage this year.

This is where I stepped in. I asked that farmer to bring me some of the same manure that was being sold and some of the hay that was fed to the animals. We set up our own bioassays, using small tomato transplants. Tomatoes seem to be even more sensitive to the herbicides than bean and peas. We grew plants in our standard potting mix (STD), in a 50:50 mix of manure and potting mix (COMP), in potting mix with hay on top (STRW) and we planned to use a manure tea, too, but we never did apply it. So the (TEA) treatment in the photos is really just another control with standard potting mix. Below are pictures of the results after three weeks of growth. 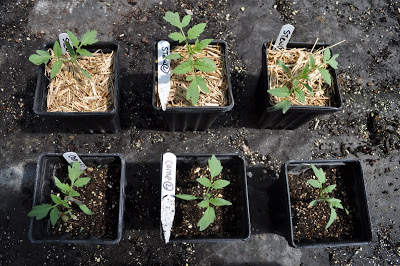 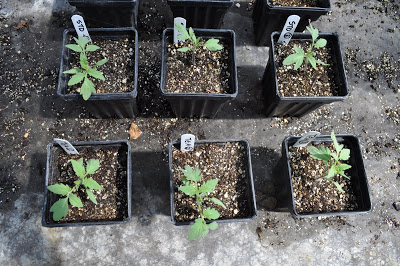 Both rows are in standard potting mix (controls) 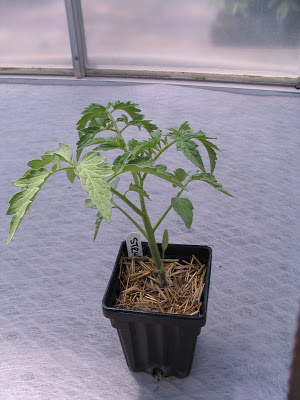 Grown with the suspected hay 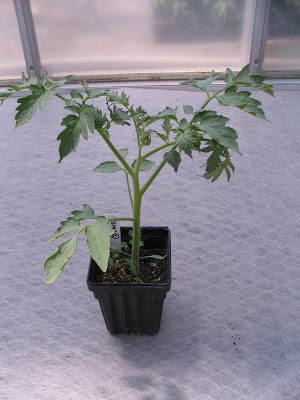 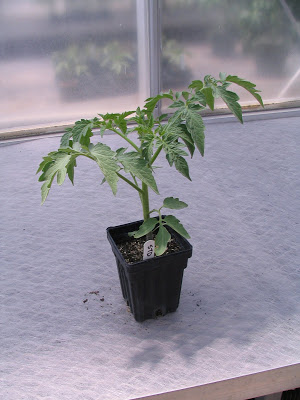 The control, grown in standard potting mix
The manure and hay provided to us did not damage these plants after three weeks. I assume the samples provided to us are representative of what the gardeners used.
THIS IS WHAT I WROTE AT THE THREE WEEK TIME PERIOD:
So, if this is the same manure the gardeners used, we still do not know what has damaged the plants in the gardens! Although some diseases and insect damage can cause distortion, the damage these gardeners experienced really does look like herbicide damage. But where the herbicide came from is still a mystery. We do not know if it was air-borne drift or if it is in the soil. Some of the gardeners were going to do some of their own testing, but I don’t have those results back yet. I’ll keep you posted!
NOW GO READ THE POST AT FIVE WEEKS AND SEVEN WEEKS AFTER PLANTING.
THE RESULTS ARE VERY DIFFERENT.
Authored by Jeanine Davis, NC Alternative Crops & Organics Program, Department of Horticultural Science, NC State University.
share Share This Article