Written by Rob Austin. This project was conducted by Rob Austin and Scott King in Soil Science (now Crop and Soil Sciences) and Jeanine Davis in Horticultural Science. It was funded by a GoldenLeaf Foundation grant. Reviewed 6/7/2022.

For each site, a set of geo-referenced maps were produced that show i. the configuration and layout of the hop yard (site map), ii. the location of the soil and tissue samples collected with the corresponding identification number, and (iii), maps that illustrate various soil test results (soil pH, cation exchange capacity, phosphorus index, potassium Index values, etc..) and their corresponding location within the hop yard.

Plant heights at the experimental site were measured throughout the growing season with the last measurement collected July 27, 2010. Heights and growth rates varied widely both between and among varieties (Table 1). In general, Zeus, Nugget, Chinook, and Cascade were the top performers in terms of height, vigor, and overall visual health. Sterling and Northern Brewer emerged late and remained poor performers. These two varieties also suffered considerable pest damage from Japanese beetles and spider mites. Newport was also late to establish, but once the bines reached ~3 feet, their overall growth and vigor surged. Within varieties, Cascade showed the greatest variability (mean: 5.3 ft, StdDev: 3.1). In general, the high-alpha acid varieties performed best, with Cascade the exception.

In April 2010, 106 soil samples were collected at 4 hops yards in the mountains. Among all farms, surface (0-4″) soil pH averaged 6.2. pH values ranged significantly among all farms with 50% of the samples falling between 5.8 and 6.7 (Figure 2). Between the mountain hops farms, pH levels fell within two groups; farms A and B with an average pH around 5.9, and farms B and C with an average pH around 6.6 (Figure 2). The deep samples collected (6-10″) show a close correlation with surface soil pH (+/- 0.3) with one exception, Farm D (Figure 3). Farm D’s subsoil pH is below 5.2 and is representative of the soil conditions before heavily liming in 2009.

To compare, in Willamette Valley, the major hop producing region in the US, soil pH ranges from 5.0 to 7.0. The influence of surface soil pH on yields is however unclear in this region (Gingrich, 2000). 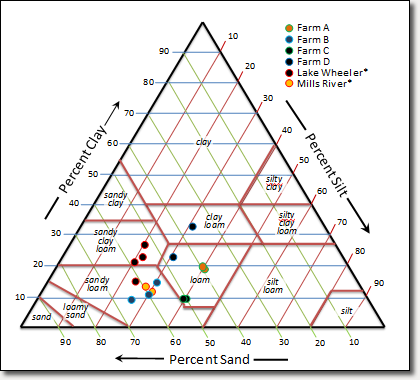 Table 2: Average percent of sand, silt, and clay within the
top 4 inches of the soil surface. (* research hop yards)

Results from the soil tests were used to summarize the existing conditions before the 2010 growing season. Summary statistics for each soil nutrient are listed in Table 3. A 99% confidence interval for the sample means is calculated and used to identify a range of values representative for all participating farms. Because this study includes analyzing conditions at various hops yards without corresponding control plots or treatments, the nutrient analysis is comparative in nature and is intended for relative interpretation.

To compare the soil conditions between farms, the percent of samples collected at each hops yard that fell outside the upper or lower bounds of the 99% mean confidence interval were tabulated (Table 4). Results indicate substantial variation between the four hops yards. A significant portion of the observed variability between farms is a likely result of the varying use and forms of liming material, organic amendments, and fertilizers applied. These results do not indicate nutrients at either sufficient, deficient, or toxic levels, but rather provide a qualitative comparison between site conditions.

Table 4: Percent of soil samples that are less than or greater than the 99% mean confidence interval for each elemental nutrient and measured soil property.

Table 6: Total yield, average yield, and number of plants producing greater than 0.0, 0.5, 1.0,and 5.0 ounces of wet hops recorded by variety. All weights given as green (wet) weights. 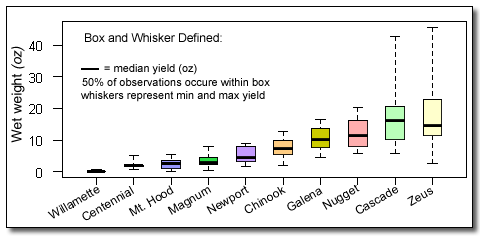 Table 7: Total yield, average yield, and number of plants producing greater than 0.0, 0.5, 1.0,and 5.0 ounces of wet hops recorded by variety. All weights given as green (wet) weights.

Results from the tissue analysis were summarized using the same approach as for soil nutrients. Tissue samples were collected twice during the 2010 growing season; May 25th, during the vegetative stage, and July 15th, at reproduction stage and full flower. Summary statistics for each nutrient are listed in Tables 4 and 5 (macronutrients are given as a percent, micronutrients are listed as ppm). Although no tissue standards are available for hops, these tables help construct nutrient sufficiency ranges from which future fertilization programs can be compared and analyzed.

Table 4: Summary of nutrient levels within tissue samples at the four mountain hops yards. Data collected May 25th, 2010 during the vegetative stage.