Find this article at:
go.ncsu.edu/readext?530201
— Written By Jeanine Davis 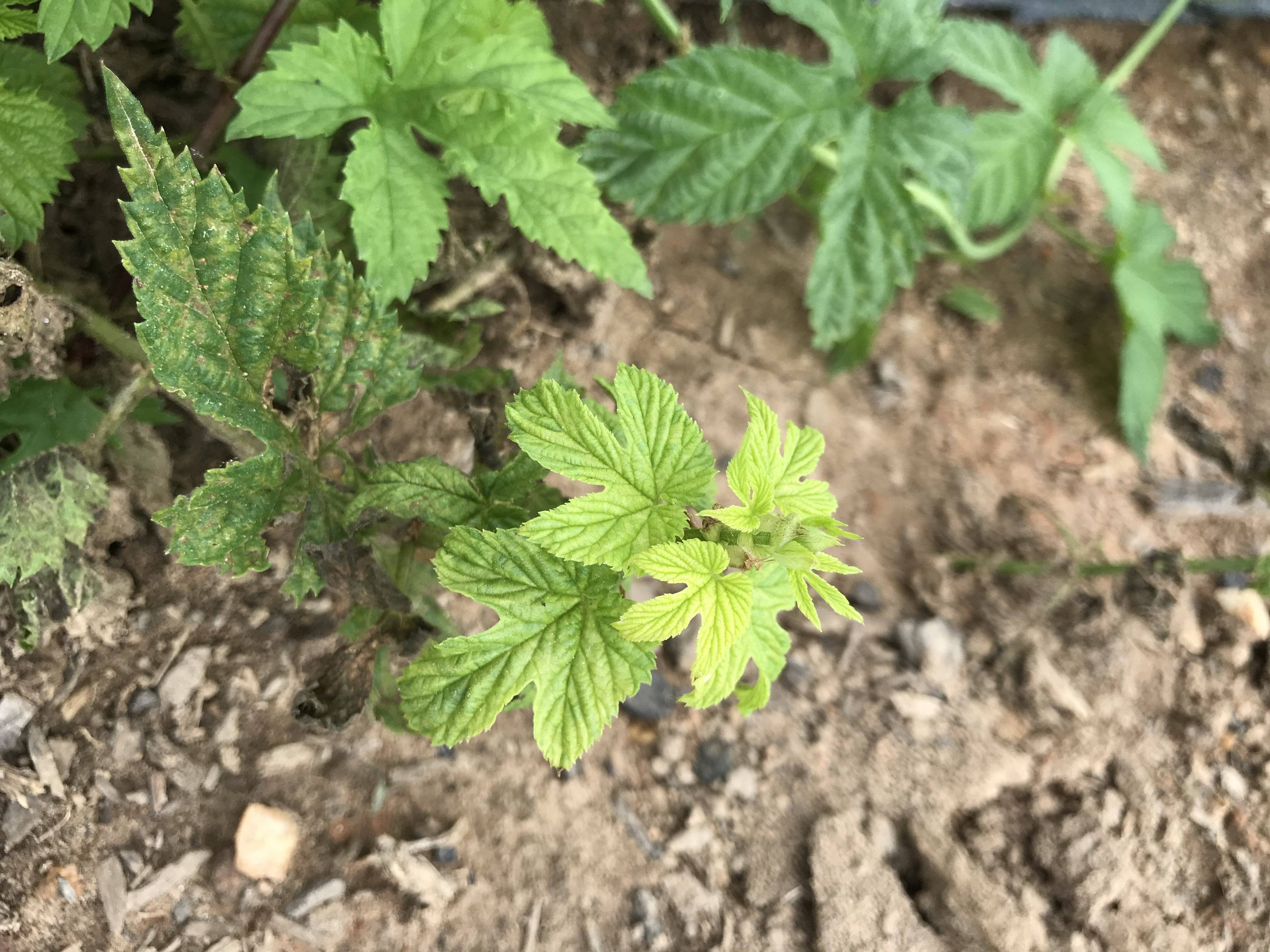 Today we received confirmation that we have downy mildew in one of our research hop yards in Mills River, NC. Downy mildew (Pseudoperonospora humuli) is a major disease for hops, especially on the east coast. Here in western North Carolina we have experienced much more rain over the past few weeks than usual, and more precipitation is forecast for next week. This has created very favorable conditions for hop downy mildew to grow and generate spores to spread its infection. 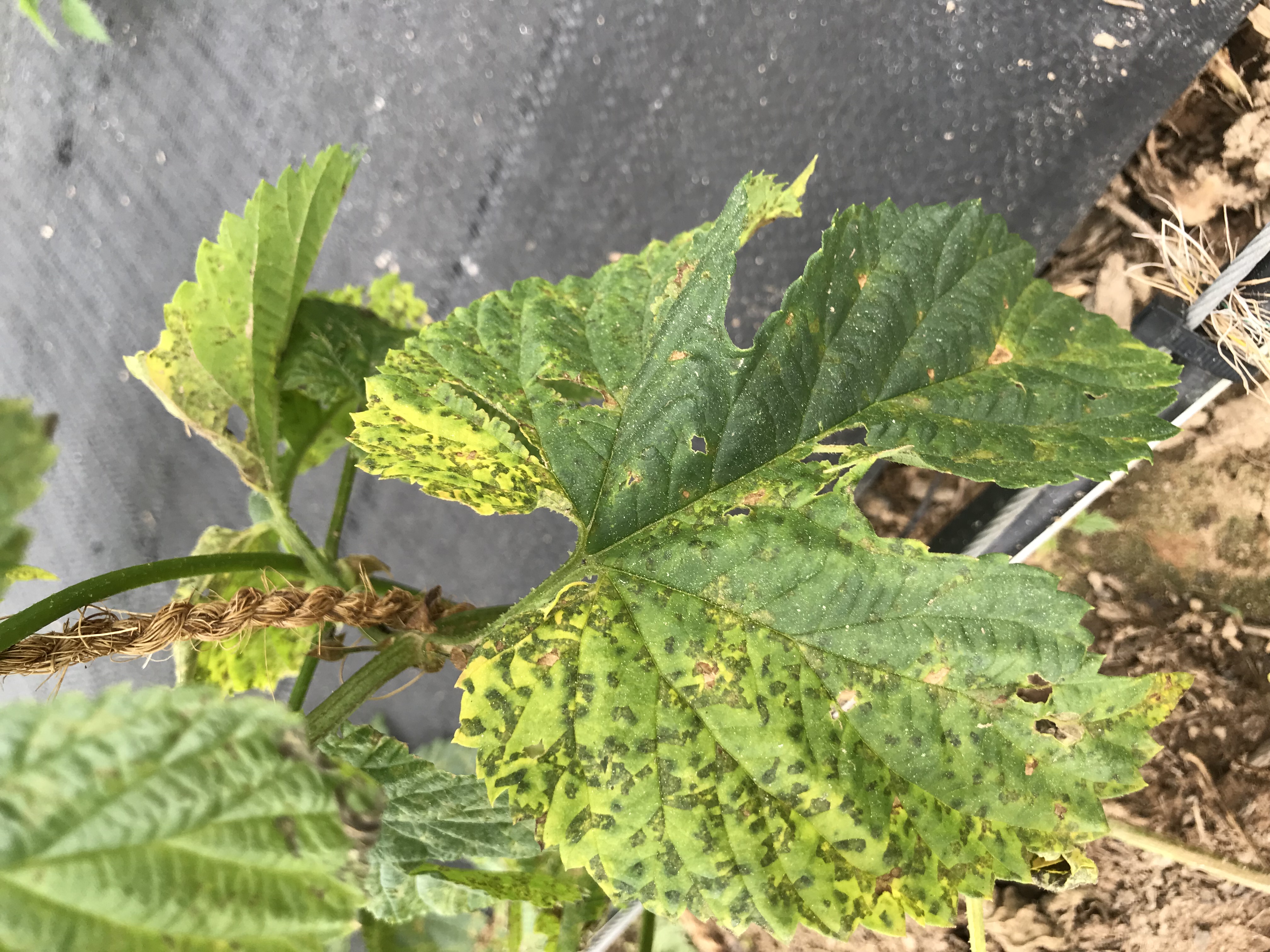 Downy mildew can be at least partially controlled with fungicides. There is a list a fungicides recommended for hop downy mildew control with spray instructions,  which can be found in the Southeastern U.S. Vegetable Crop Handbook. It is important to alternate/rotate products so you are using different “chemistries” and reduce the risks of developing resistance to any one product. Just as an example, in our oldest research hop yard, we have systemic downy mildew, so we use a Ridomil soil drench in early spring. Then later in the season once downy mildew is confirmed on the foliage, we alternate weekly foliar sprays with Aliette (fosetyl-Al), Ridomil (mefenoxam), Tanos (famoxadone + cymoxanil)/Kocide (fixed copper), Revus (mandipropamid), and Ranman (cyazofamid). Watch for limits to the number of sprays that can be applied per season for some products and for preharvest intervals. It is critical to get good coverage; so ensure that you have the appropriate spray equipment to do so. Scout your hop yard weekly. If you see any suspicious lesions, send samples into the North Carolina State University Plant Disease and Insect Clinic immediately. Some growers choose to start a protective spray program very early in the season, whether the disease has been confirmed or not.

For organic growers, we have not found many of the available fungicides to be very effective. Selecting varieties with good downy mildew resistance, buying disease free plants, selecting a growing site with excellent water drainage and air-circulation, scouting regularly, applying protective sprays such as copper weekly (protective only, won’t help once the disease has started), and experimenting with approved organic products such as Actinovate and Sonata is our suggested approach. 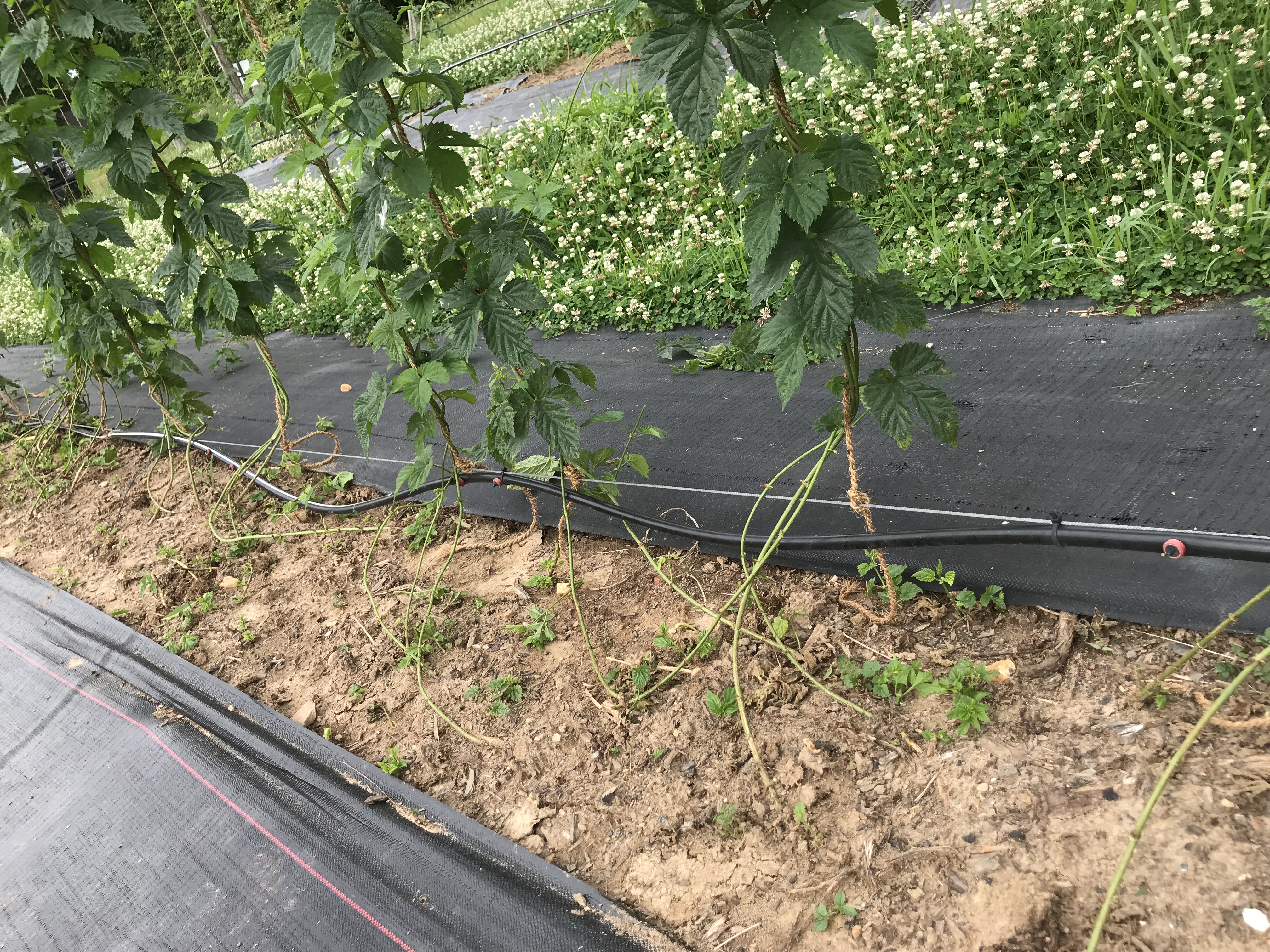 There are also a few things you can and should do with your cultivation practices to reduce the chances of getting an infection, reducing the severity of the infection, and limiting the spread of the disease. Note that varieties have very different levels of susceptibility to infection by downy mildew. This should be an important factor in your cultivar decision process.

One of the most important things to do is increase air circulation to reduce air moisture around the foliage. This is especially important in our hot and humid climate. This can be done in several ways:

1. Remove the first shoot growth in the spring. We do this as part of our normal cutting back process since our plants begin growing earlier than we want them to anyway. But this practice will also help suppress downy mildew development in yards where downy mildew was present in previous years. This is usually done mechanically, but larger yards may choose to use herbicides.

2. Defoliate and remove shoots on the lower portion of the hop plants. Once hop bines are 4 to 5 feet tall, you can begin removing the bottom leaves. By the time the bines begins to flower, 2 to 3 feet of the bines from the ground up should be bare. Many small-scale producers do this by hand, gradually removing leaves as the plants grow. This is not practical in larger yards where growers often use a once over application of an herbicide. This is a controversial practice in the eastern U.S. and really needs to be studied. Some people say it works, others say it reduces yield, and others say it just spreads other diseases, such as viruses and viroids. Consider conducting your own small experiment.

3. If you have grass, clover, or other cover crops in your yard, keep them cut low, especially near the plants. This will reduce the humidity around the base of the plants.

4. Also, eliminate any low spots in your hop yard where there might be standing water after heavy rains.

More information on downy mildew and hops can be found at: