Find this article at:
go.ncsu.edu/readext?466518
— Written By Jeanine Davis

11/11/2022 – This project is complete. Reports, papers, and varieties developed from this study can be found on the eOrganic page devoted to this project.

This article was written by Dr. Luping Qu, research specialist in our NC Alternative Crops and Organics Program in the Department of Horticultural Science at NC State University. This project is funded by USDA Grant number: 2012-51300-20006 with the project name Organic Cucurbit Research: Critical Pest Management Challenges. The project is led by Dr. Michael Mazourek, Cornell University. These are preliminary results from the western North Carolina location. this study will continue for another growing season in 2016. A full report for all the sites and papers will be published later. You can follow this project on eOrganic

Started in 2014 and continued in 2015, we conducted replicated field trials for this project at the Mountain Research Station in Waynesville, NC. Trialed crops include cucumber, melon, and summer squash/zucchini. For each crop eight open pollinated (OP) and hybrid cultivars that were either widespread standard cultivars or novel sources of disease resistance were planted in the field in each year following a randomized complete block experimental design with three replications. Seeds were greenhouse started in 50-cell flats. Melons were transplanted in the field on June 4 and cucumbers and summer squash were transplanted on June 20. Field preparations included raised beds, black plastic mulch, and drip irrigation. Between row spacing was 9 x 9 feet (center to center) and in row spacing was 2 feet for melon and summer squash and 1 food for cucumber. Row cover was used as a physical barrier for two weeks after transplanting for protecting young plants from damage by cucumber beetles in 2014. In 2015, row cover was applied for melons for 4 days after transplanting and had to be removed because the weather was too warm to keep it on without causing damage to the plants. Between row weed control was done by hand, cultivator, and laying straw. No disease control was practiced.

Cucumber beetles were observed in the filed in 2014 during the later stage of plant growth and the population was too small to cause visible plant damage. In 2015, these beetles showed up a few days after transplanting and damaged the young plants to some degree but plants outgrew the damage. Whether the beetle effect at young plant stage caused any fruit yield reduction was not assessed.

Powdery mildew was observed on melons in 2014 and on summer squash in 2014 and 2015. Virus disease was not observed/screened at our trial site. 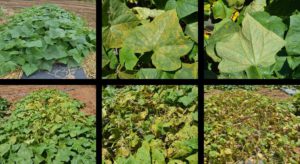 Downy mildew had developed on all other varieties except DMR-NY 264 by 7/28/2014. Downy mildew was first noticed on DMR-NY 264 on 8/20/2014. Leaf samples were taken on 9/2/2014 and downy Mildew was confirmed by the North Carolina State University Plant Disease and Insect Clinic.

Downy mildew was first noticed on Earlichamp melons on 7/28/2014 and it developed fast. The melons of this variety ripened quickly, too. It was difficult to differentiate the diseased leaves from natural senescence.  The disease developed on other varieties a few days later.

Powdery mildew was first noticed on Black Beauty, Gentry, and Multipik on 8/1/2014. Gentry and Multipik appeared to be more susceptible to this disease. Downy mildew occurred later and was obvious on 8/13/2014. Because the presence of powdery mildew, downy symptoms were not readily easy to visualize.