Update on the Research Hop Yard in Mills River, NC

Find this article at:
go.ncsu.edu/readext?466564
— Written By Jeanine Davis and last updated by Cloe Nichols 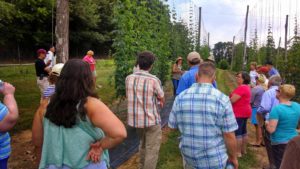 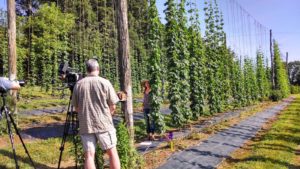 Brewconomy is filming a documentary on the economic impacts of the craft beer industry and they stopped by to visit with us in the research hop yard.

We have so much going on in our program right now, it is hard to keep everyone informed via our various social media venues. I will try to do short updates on our various programs over the next few weeks. Let’s start with the hops. Our research hop yard is now four years old. It is a variety trial that started out with ten varieties, each replicated four times. We lost one variety, Newport, to downy mildew during the second year. It actually killed the crowns. So last year we planted a few other varieties in those empty sections. We now have four year old Cascade, Chinook, Magnum, Galena, Centennial, Zeus (Columbus), Nugget, Mt. Hood, and Willamette plants and two year old Santiam, Vojvodina, and Canadian Red Vine plants.

We have systemic downy mildew in our yard, but the season started out strong. We thought that just cutting back the plants through late April and removing any downy mildew spikes would keep the disease under control until we started foliar sprays, but once we let the bines grow, it showed up with a vengeance. So we cut our plants back again REALLY late (May 7th), did a soil drench with Ridomil, and then let the plants regrow. There is still a little downy mildew in the yard, but we are managing it (so far) with our weekly spray schedule. After my monthly discussion with a group of hop researchers from the eastern half of North America, we have decided that we will crown the plants next spring (shave off the top of the crowns, just below the soil surface). This is giving good downy mildew and powdery mildew control in Vermont.

The late cut back set the plants back in terms of bine growth, but we have abundant lateral growth and there is a good cone set on our strongest varieties. Many of us were curious about the practice of topping the bines at the summer solstice that Dr. Greg Lewis told us about in spring of 2013, so we gave that a try last week. We have two strings to each crown, so we topped one and left the other to grow. If the bine looked like it had naturally terminated, we left it alone. The theory is that this will encourage more lateral formation and thus more cones. We will keep you informed!

I still owe you a transcript from our hop grower meeting in April. I will get to that soon. I promise!